Daniela’s Day of the Dead 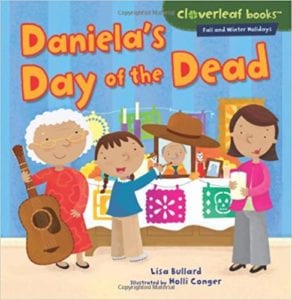 Daniela's Day of the Dead

It might sound funny to some people, but Daniela was actually looking forward to the Day of the Dead. It was her "grandpa's favorite holiday." Even though Daniela and her family lived in the United States, her grandparents once lived in Mexico. Grandpa would laugh, smile, and play his guitar while Daniela sang along with him and pretended to play hers because it was a happy time, not a sad one. It would be different this year because she would help set up the `ofrenda,' or altar, for Grandpa because he had died. Mama told her that even though she won't be able to see him on the Day of the Dead he would be there.

There were many things the family would put on the altar for Grandpa. Grandma would put his guitar there and Mama would put up his picture. Daniela smiled as she tried on his wide-brimmed hat because that would go on there too. Mama took her to the market to look at the colorful sugar skulls and skeletons. No, they weren't scary at all and Daniela even found a little skeleton holding a guitar just like Grandpa did. Then it was off to the bakery and then to the cemetery to leave some marigolds for him. They must hurry because soon other family members would come to celebrate the Day of the Dead with them!

This book is an excellent way to teach children about an important holiday celebration, The Day of the Dead. The story does an excellent job of depicting the joyous nature of preparing an altar for Grandpa. Even though Daniela misses him, she is looking forward to his visit and wants to make it a special place for him. The bright, colorful artwork brings out excitement and anticipation as the family prepares for the holiday. Throughout the book are sidebars with informative vignettes. For example, one says that "In the United States, Day of the Dead is November 2. In Mexico, it often lasts for more than one day. There it might begin on October 31 or November 1." In the back of the book is an index, a glossary, directions for making a macaroni skeleton, and additional book and website resources to explore. There are free downloadable educational resources on the publisher's website.

Quill says: This book would be an excellent addition to any homeschool or classroom library for children to learn about this very special Hispanic holiday.