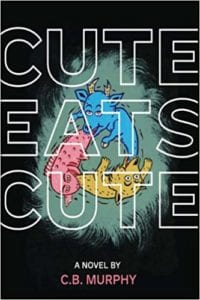 Cute Eats Cute is a new twist on the classic coming-of-age story. Sam is a smart, cynical teenager. His tone, as narrator, is ironic and irreverent throughout the novel, and I laughed out loud a few times while reading the book. At the same time Sam is almost painfully earnest in his search for an adult role model. The contrast between Sam's sometimes flippant tone and his sincerity is echoed by the novel as a whole. Cute Eats Cute is funny and diverting, while at the same time having a serious message. The novel is a statement about the time and the political climate we live in. Seeing our culture through the eyes of a young person who is trying to make sense of it allows us to take a step back and look at the big picture.

Sam tries on the identities and politics of his mother, his father, his friends, and other adults he admires. His parents are former hippies who have lately found themselves on opposite sides of the spectrum of local politics. If Sam models himself after one parent, he will alienate the other. The split between his parents' identities-- which are also two sides of Sam-- is made more poignant by the fact that they seem in danger of splitting up entirely.

Of course, Sam is a teenager who also identifies with his peers-- especially a girl named Megan-- and craves their approval most of all. Murphy assumes the voice of a teenager convincingly. Sam's ironic sense of humor, his awkwardness, uncertainty, and self-consciousness will be familiar, sometimes painfully, to anyone who is or has been a teenager. Though we live through Sam's mistakes, feeling the pain or embarrassment with him, it is easy as a reader to forgive the errors and to be on Sam's side. Sam is a believable teenager, interested in being liked, especially by girls, and not particularly interested in school or his parents. At the same time Sam is an honest kid who wants very much to do the right thing. His primary struggle is finding the right way to be a good person. There are so many examples around him, and they contradict each other.

Sam is discovering his true self while finding the courage to be that person, the universal experience of teenagers. At the same time Sam's experience is unlike that of most kids, ranging from unusual to absurd. Cute Eats Cute is almost farcical at times. Sam's mother becomes a Wiccan and wants to eat at a vegan restaurant while his father becomes a hunter. Sam's friends are militant about animal rights. The story is set against the background of a local street-theater group, which stages avant-garde performances about hunters killing deer.

The extreme behavior of Murphy's characters, and the situations they tangle themselves in, make Cute Eats Cute, an entertaining read. It is funny and unpredictable enough that I wanted to keep reading to find out what would happen next. As the story unfolds, Murphy's adult characters prove to be much like Sam and his friends, seeing the world in terms of good and bad, and sometimes blindly following their peers.

At the same time Murphy allows readers to empathize with all of the characters, making them likable, despite their sometimes ridiculous behavior, and although the adults in Sam's life behave in ways that seem one-dimensional, we learn about the hidden dimensions of Sam's parents through his conversations with them. Readers will almost certainly recognize elements of their own families in the relationships between Sam, his parents, and his younger brother, Perry. Sam, like all teenagers, sees his parents' faults clearly, describing them with dry teenage humor. As he points out the worst of his family's faults and dysfunction, readers will see beneath his impressions loving parents and a sweet relationship between Sam and his brother.

Sam sees truth in the viewpoints of each of the adults in his life, even though they disagree, sometimes violently and sometimes within his own home. The challenge for Sam is to embody what he believes with confidence, despite the fact that he will not be able to please all of the people in his life all of the time. As this is a challenge for most of us, Cute Eats Cute will inspire readers to look at our own role models and politics while enjoying a good story with memorable characters and well-written dialogue.

Quill says: A funny engaging novel with a message.