Cubeology: Are You Brave Enough To Play? 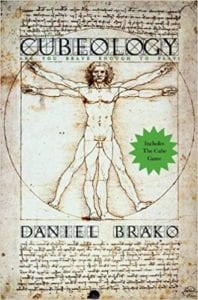 Cubeology: Are You Brave Enough To Play?

There’s been a death and somebody called 911. The paramedics and the police quickly arrive on the scene. Did Sean Wainwright die a natural death or was there something sinister at work? The police want to know and poor Doris Mallory is unable to hide the secret, the secret of The Cube. This curious scenario is the opening sequence of Cubeology, a beginning that will keep you guessing well into the story.

After this rather curious and intriguing start, the story backtracks a bit so the reader can get a peek into what might have happened to Sean. We go back in time and meet Sean who has become fixated on The Cube, an ancient game that requires seven players, players with different personality “types” (as defined by the game). Sean gets his friend Umeko, a beautiful violin player, to help him and she throws herself wholeheartedly into the project. Together they search out the remaining five players.

Once a group of players had been selected, they all agree to meet at one of the player’s houses. Sean arrives first and draws, in chalk, the required markings on the floor, and places a chair over each mark. When the other players arrive, they seat themselves according to their personality types. Now it is time to play the game.

Reciting the ancient chant of The Cube, the group then waits for something magical to happen. Did it work? Did anything happen? At first, they think the recitation failed but then Sean holds up a finger and there is a flame fluttering above it. Everybody is amazed, and overjoyed, until Sean loses control of the fire and loses his life.

Cubeology is the intriguing tale of seven college students, strangers to each other at first, but drawn together by The Cube, a game of mystery and magic. What first appears to be a harmless game to pass away long school nights soon takes control over the lives of these students and challenges them to discover The Cube’s hidden secrets before it is too late and someone else gets hurt.

As the friends adjust to their new and growing magical powers (controlling luck, sensing the validity of others’ statements), bizarre and unexpected things start to happen, from being buried in sand to climbing into a portal of blackness. Just as everything looks hopeless, they get help from an unexpected source – Talriel, a stranger who claims to know of The Cube and more importantly, how to harness and control its power.

Talriel guides the ‘Cube novices’ as they strive to gain control over their powers and all seems well until one of the students begins to suspect Talriel of ulterior motives. Is something amiss? Events continue to spiral out of control and lead to an exciting showdown as the players learn exactly what is happening.

Cubeology is based on a real game that the author cleverly took and wrote a story around, repeatedly asking the reader to consider what if? What if magic really exists? What if we could harness its power? What if people who didn’t understand a game’s power got their hands on it and began playing?

To draw the reader in, Brako begins the book with a two page instruction sheet on how to complete your own Cube. At the end of the book, you’ll learn just what your Cube means - but don't peek at the ending - read the story first! With the reader thus engaged, the story can begin. Curious to see what my Cube might say, I played along and created a Cube. It was fun and kept me invested in what the characters were doing, the dangers they were facing and hoping that they would escape with their lives. At the end of the book is a detailed explanation of all aspects of a Cube so you can truly play the game. The author is to be commended for taking an old game and creating a mystical and intriguing world that keeps readers turning pages to see just what is behind The Cube.

Quill says: Unique in every way, Cubeology is a book game-players, mystery lovers, and science fiction fans should check out.

To learn more about Cubeology: Are You Brave Enough To Play?, please visit the author's website at: www.danielbrako.com