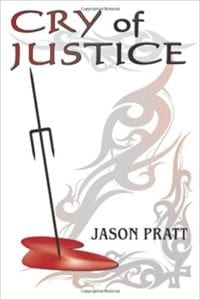 Giant Shoulderbeasts who stomp everything in their path, colossal Aasvogels flying through the air as they rip apart anything they meet, and Rogues, destroying every man standing in their way. These and many other intriguing creatures fill the pages of Jason Pratt’s Cry of Justice, an exciting new entry in the world of fantasy. Lest you fear this is just another book with lots of monsters and no plot, don’t worry. The vast assortment of creatures are simply a backdrop for a great story with richly developed characters.

Cry of Justice takes us to the world of Mikon. Life is in turmoil as the Culling Wars have devastated the entire planet, whole cultures have been wiped out, and people struggle to survive. Warriors, led by powerful Magi, are trying to bring some sanity back to Mikon, under their power of course. Portunista, a strong-willed woman who leads an entire brigade, is one of the Magi. She is joined by Seifas, a powerful fighter who is a remnant of an annihilated warrior tribe, Gaekwar, an obedient subcommander, and Jian, a stranger who joins their fight.

As the story opens, Portunista’s brigade is attempting to bring peace to their region. After fending off an attack (which is where we first meet Shoulderbeasts), Portunista learns of a nearby Cadrist’s Tower, one that Seifas assures her is abandoned. Leaving her brigade behind, Portunista brings her small, trusted – or somewhat trusted – group with her to investigate. This is where the fun truly begins as there are wonderous secrets hidden within the walls of the tower including a portal that instantly transports those entering to the middlelands, high in the trees where Aasvogels are waiting with enormous talons to rip apart their next meal. The frantic escape was a well-written page-turner.

As the exploration of the tower continues,three brigades arrive and begin to prepare for battle. What will Portunista do to protect the tower? How will she ever fight three brigades with her rag-tag team of wanderers?

What I particularly enjoyed about Cry of Justice were the well-developed characters and their interactions. Portunista is at first distrustful of Jian, the stranger who showed up at camp one day. She wants to get rid of him, but decides to keep him around and soon he has earned her trust. Or has he? And why is he so darn happy all the time? What is his secret? Seifas is a loyal underling, a juacuara (the result of the Magi attempting to breed the perfect warrior), and the last of his tribe of the Guacu-ara, the others wiped out during the Culling. Once he meets a brother juacuara, however, his loyalty is tested. Will he stand beside Portunista or join the remnants of the juacuara and fight her? These questions and many others will keep you turning the pages of this first book in a planned trilogy.

Cry of Justice gets off to a slow start as the author works to set up the story. Additionally, the reader is bombarded with lots of names of characters, tribes of people, creatures, and terminology, some with little or no explanation. It takes a bit of concentration to get through the first several chapters. The tale gets going once the characters begin their exploration of the tower, and all the names start to fall into place. Part of the confusion at the start is because the author has used several different voices to tell the story and it takes a while to adjust to this style. Much of the book is told by a narrator, and this is where the writing is fluid and it becomes easy to get lost in the adventure. However, each of the main characters also keeps a journal and when these entries are written, the reader is slammed back to reality as the story comes to a swift stop by the break in flow. Truly annoying, especially for anybody over 40, is the tiny, tiny font used for these journal entries. It is hard to read and makes one want to skip these sections. I hope the author, in his next two books, excludes the journal entries and stays with a narrator. It works much better.

Quill says: After a clunky start, this fantasy adventure gets rip-roaring good.