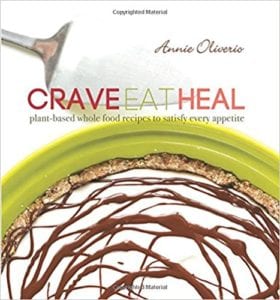 If you think plant-based diets are boring, think again. Many people have someone in the family that’s either a vegetarian or vegan in the family and have no idea what to serve up when they visit. Simply throwing a salad their way isn’t a particularly good solution, but adding a side dish can be. If opting for a plant-based lifestyle, instead of scouring the Internet trying to amass one’s own recipes, cookbooks like Crave, Eat, Heal can be not only helpful, but fun. One of the first things I spotted was a recipe that incorporated goji berries. What to do with them?

Well, I just happened to have all the ingredients on hand and tried out “Sarah’s Almond & Goji Berry Chocolate Bark.” In the past I tried out one peppermint bark recipe from a Moosewood cookbook and was delighted with the result. This one is slightly different in that it incorporates some of the more unusual ingredients such as the goji berries and cacao nibs. These are great ingredients and aside from using them sporadically, I now have a recipe that’s sure to please even those who aren’t on plant-based diets. It’s one of many great recipes in this book that will get people moving toward a healthful lifestyle and satisfy the palate...and that sweet tooth.

We all have cravings and Annie Oliverio is no different. She begins by describing cravings that most of us have experienced in our lives. Those M & M’s called out to her and so did that buttery popcorn. She had cravings that were “salty, sweet, tart, spicy” that made her gravitate toward unhealthy foods. Working through Crave, Eat, Heal, I can easily see how Oliverio targets the “craving” part. The almond & gogi berry bark is under the chocolate section, but other sections address other needs and cravings that crop up. If you are craving those carbs (who isn’t) there are even recipes for French toast and pizza. I tried both, but did adapt them to my own tastes and needs.

What Oliverio makes clear from the start is that this isn’t a “diet” book nor is she a dietician, although I must say any dietician could learn from this book. It’s a book that “simply offers whole food, plant-based recipes designed to healthfully satisfy whatever kind of craving sneaks up on you, no matter what time of day it is.” There are a few hints in the front that can be very helpful. For example, how to cook sans baking oil. There are introductory sections on ingredients used in this book, supplements, and one on those all-important friends who helped with some of the recipes.

Each recipe is prefaced by a personal vignette, something I do like in any cookbook! The vignette is followed by an ingredient list and the all important directions. There are some suggestions and icons indicating special notes about the recipe (i.e. gluten-free, oil-free, and preparation difficulty) as well as prep and cook times. There are some excellent photographs that give this book a definite yum factor, but it’s not overwhelmed with them. There are still several recipes I want to try, but those I did I thoroughly enjoyed. I have yet to experiment with things such as tempeh bacon, but I’m into it! A very nice book with a wide variety of recipes to satisfy anyone who’s now on a plant-based diet or wants to experiment with one.

Quill says: Crave, Eat, Heal is a great, well-rounded cookbook for the vegan or anyone wanting to experiment with plant-based recipes!