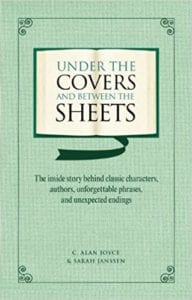 Books, books, books. If you aren’t a bibliophile, you may as well stop reading right this minute. Years ago in the New Yorker there was a cartoon, I believe, by George Booth. There was an eccentric looking old woman selling a few books outside her doorway on a porch. There was a smattering of books at a reasonable price on a table. She beckoned to a passerby, who just happened to take note of the pile, and said, “There’s plenty more books inside.” An upward glance at her ramshackle house gave a glimpse into her house …there were thousands of books hanging out the windows and looked as if they were coming out of the woodwork. If you are a bibliophile or just happened to love little literary anecdotes and would like to know the inside scoops about your favorite authors or books, you’ve come to the right place when you look Under the Covers and Between the Sheets.

This is one of those books that can be read from cover to cover or browsed at will if you please. Flipping this way and that way finding out little vignettes such as the fact that “mainlining caffeine” helped Honoré de Balzac “maintain an incredibly prolific output,” but also shortened his life considerably, will make your eyebrows curl. Apparently getting a buzz from raw beans may be one of the reasons the man wrote more than ninety books. Shame on the authors for not using the accent aigu on his name, but that is being a tad petty. Speaking of the letter “e,” Ernest Vincent Wright “challenged himself to write a complete novel without using the letter ‘e.’” Just imagine a 50,110 word lipogram! There were other ones that made my eyes widen or roll, but I’ll refrain from discussing them or I’ll become a spoiler.

I loved the writers as reviewers section, especially when Truman Capote, commenting on Jack Kerouac’s On the Road, quipped, “That’s not writing, that’s typing.” It goes to show that even writers, who in reviewing a colleague’s book, not only use critical analysis, but are sometimes just plain old critical, cruel and curmudgeonly. This book takes many leaps and bounds through literary history and takes a look at unfinished works of genius, works that almost hit the circular file (or did), literary greats who battled with addiction, obsessive and odd ways writers write, weird books, literary hoaxes, great rejection slips, who sued who for plagiarism, and much more! Did you know that Shel Silverstein won a songwriting Grammy for a Johnny Cash Song? That he did. If you enjoy tidbits like this you might just want to pick up a copy of this book!

When I read this book I didn’t read it from cover to cover in a day, which is something that can be done, but rather read a bit at a time to savor it. Many of the facts and stories I was familiar with as they are “common knowledge” in the literary world, but many of them were WOW moments. For example there was one childhood memoir discussed, which will remain unnamed in this review (no spoilers please!), that had been debunked as a total fraud and was written by a former Ku Klux Klan member. I’ve obviously been living under a rock. There will be some difference of opinion with some readers who claim they heard a different version of some of the vignettes in this book, but no matter …this is simply a fun compilation of literary tidbits few bibliophiles will want to pass up!

Quill says: This is a laudable literary compendium the discerning bibliophile will savor. In other words, this book is FUN!