Cormac: The Tale of a Dog Gone Missing By: Sonny Brewer 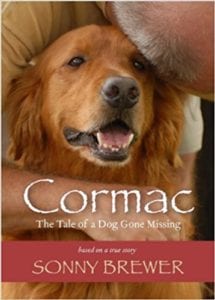 Cormac: The Tale of a Dog Gone Missing

The story of Cormac: The Tale of a Dog Gone Missing follows the life of a beautiful Golden Retriever and the man who loves him. It is based on a true story although the author admits that "there are stretches in here, and a little exaggeration now and again."

Sonny Brewer is a bookstore owner, in a small town in Alabama where few people live and fewer still wander into his store. He loves books and dogs but has had little luck with the later. His first dog, a German Shepherd that he owned as a child, became paralyzed later in life and Sonny was forced to watch as his father shot the dog. Undoubtedly traumatized, he still wanted another dog. The next four-legged friend didn't arrive until Sonny was an adult. This dog was a hyper-active Jack Russell named Zebbie. The dog was too destructive around the store and had the bad habit of jumping out of moving vehicles. Realizing that the energetic dog was too much, Sonny found Zebbie a more suitable home. Finally, Sonny finds the perfect dog when he and his family go to a Golden Retriever breeder and one special puppy seeks him out. The two soon become inseparable.

The early part of Cormac follows the every day antics of this lovable dog and his adoring owner. It is light and fun reading. About mid-way through the book, Sonny, an author, leaves for a book tour, giving careful instructions to his friend who will be watching Cormac. A few days later, the dog, who is terrified of thunder, runs through his electric dog fence during a storm and disappears. Thus begins a long, painful search by Sonny Brewer as he searches for his best friend.

As a dog lover, I found this well-written book touching. It was nice to see a grown man admit how much his dog meant to him, and to see what lengths he would go to bring that dog home. I have read other reviews of this book where dog advocates have come harshly on the author for a) not neutering his dog; b) leaving a dog he knows is afraid of thunder with a friend when the dog fencing was not working correctly; and c) coming down so hard on shelters that transported the dog out of state. I agree that the dog should have been neutered, but beyond that, I believe the author acted as any bereaved pet owner would. Never having used an electric dog fence, I didn't know how temperamental they could be and that they might need periodic adjusting to work properly. I also suspect that had one of my dogs gone missing and then had shelter workers hidden the facts of his transportation from me, I too would have reacted poorly. Brewer admits to his frustrations time and again. I feel he should be praised for admitting his mistakes and for educating readers to what can happen to a runaway dog.

Quill says: A good book about a "Dog Gone Missing."