Copywrite God and Me: Lyrics from a Collection of Inspired Songs 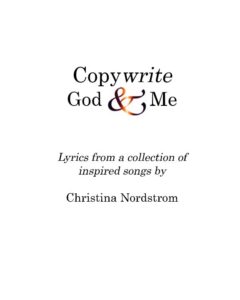 Copywrite God and Me: Lyrics from a Collection of Inspired Songs

Lyrics to ninety songs with accompanying narrative are presented in this fascinating look inside the thinking processes of a performer, much of whose musical endeavors have a charitable purpose. Most show an active faith in God and in the mysterious creative process, the lyrics seeming to the author to come from somewhere outside herself. She sees herself often as just the transcriber. Thus it’s fitting that the first song in the collection is called “Thank You for the Blessings”:

Thank you for the blessings of this life
And the promise that your peace will bring!
May I live a life that’s worthy of your song –
To your melody my voice will sing!

“Voices of the Mountains” shares the writer’s experiences on work-study trips to El Salvador and her realization that one’s tears are a sign that love is there amidst poverty and political strife. The lyrics are a paean to her companions: campesinos, common people who were crushed beneath a lie.

“Lessons from Shoes” recalls her father polishing the children’s shoes before Sunday school (Dad, thanks for the shoes and what it took to fill them). “A Special Kind of Love” was written for friends getting married, and, the author states, for “any two people who committed their lives to each other.” The song “Mending” underscores the need to learn to apologize and ask for forgiveness, while “Find Your Way Back Home” expresses Nordstrom’s frustration when, as a child, she was told by a music teacher that she must not use her natural voice, and how she overcame that negative message:

When I was a child I spoke as a woman,
The songs that I sang were just not my own...
...Claiming your purpose depends on your will.

A particularly moving offering is a song in the “protest” vein, referencing the ”Orphan Train” initiative of the late 19th-early 20th century that transported homeless children from cities to work for farm families on the Great Plains. Nordstrom characterizes the memories of one such child: As the train pulled out trembled to the cadence of the wheels below. “The Lord’s Prayer in Blue” is an unusual number, showing clearly that connection between the author and her creative promptings, in this case almost a direct message, from God. The song is a slightly reworded blues version of the famous prayer, as it came to her in the wee hours of the morning.

Nordstrom refers to her folk genre songs as “co-creations,” many of which are infused with the spirit of “giving back” that springs from her work in community health and her travels in some of the poor countries of the world.

Quill says: Nordstrom’s book of songs and the stories behind them will be appreciated by and shared among other creative artists, especially those whose work is faith based.

For more information on Copywrite God and Me: Lyrics from a Collection of Inspired Songs, please visit the author's website at: www.chrisnordstrom.com