Come Back, Como: Winning the Heart of a Reluctant Dog 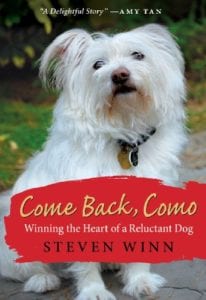 Come Back, Como: Winning the Heart of a Reluctant Dog

Como was a little white terrier mix living in a shelter when author Steven Winn first met him. Described as “…scrawny” with hunched shoulders and claws that “…dug at the floor as he tried to press himself into the cement wall behind him,” Winn admits that “with a little less fur he could have passed for a large rodent.” Not exactly the type of dog most people would adopt. And unlike many dog stories where the author immediately falls in love with the title character, Winn admits that his first reaction was anything but positive. He reluctantly agrees to adopt the dog, and so “Gandalf,” later renamed “Como,” moved in with Winn, his wife, and young daughter.

Life with Como is anything but easy. The dog had a mysterious, but likely, abused past and is particularly frightened of men. He is also quite active, bordering on hyperactive. The first night Como was home with his new family, he managed to escape from his crate, whine, keep the family awake, and destroy the plastic floor covering. It didn’t get easier the next day either. After getting off to a brisk start in a prologue that could be more appropriately called, “How Not To Catch A Dog,” the story takes a turn when the author backtracks to “How It Didn’t Begin” where he covers over 50 pages of history on his previous pet experience and why his daughter deserves a dog. However, once Como finally reappears in chapter five, the action picks up – a bit.

Come Back, Como isn’t a high-action animal story. Rather, it is about loving a somewhat unlovable dog. Como had a talent for constantly testing his owner. For example, he was always seeking out open doors and sneaking out into the big world beyond. Once he was outside, the dog seemed to enjoy his freedom as he allowed Winn to get close but not close enough to catch the wayward dog. For his part, Winn exhibited extreme patience with a dog who showed him very little affection and was challenging at best. Will the two come to love each other or will they merely co-exist?

Quill says: A sweet, if a bit slow, story about a dog who tested the patience of his owner over and over.