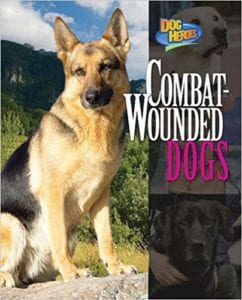 In times of war our troops valiantly struggle to protect us, but who is protecting them? Oftentimes soldiers have dogs who protect them in the line of duty. The U.S. military has approximately "2,500 canine soldiers" who serve along with our troops, "a couple hundred" of them now serving in Iraq and Afghanistan. Brendan Poelaert was in combat in Iraq when suddenly a bomb exploded, knocking him out. When he came to, he realized that he had been injured, but his first thoughts were not for himself, but rather for Flapoor, his military dog. As a medic was helping Brendan, he pleaded to him â€œI've got to get my dog to the vet.â€ Without medical assistance, Flapoor would have died.

There are three basic kinds of military dogs, German shepherds, Dutch Shepherds and Belgian Malinois. These dogs serve in many different capacities. Some guard bases, some patrol searching "buildings and combat zones for enemy soldiers," while others search for explosives. Historically there were a few dogs used in WWI, but it wasn't until WWII that they became official members of the armed forces. In this book you will learn their military history, the importance the military now places on them, you'll get to see one dressed up in his â€œspecial safety equipment,â€ you'll learn about their training, how they are treated if they are injured in combat, you'll learn about their â€œdoggie doctors,â€ and their transition from military service to pet status.

This is a fascinating overview of our military working dogs (MWDs), many of whom work alongside our troops. The story immediately drew me in with the personal story of Brendan and his dog. It not only showed how important these dogs are in our military, but also shows the close bonds they have formed with the troops. I was pleased to read about how well cared for these dogs are, especially when they are injured in combat. This is a book that will have a multilayered audience from the dog lover to those interested in anything military. It was well researched and was nicely presented. There are numerous full color photographs and small informative sidebars. In the back of the book is an index, a glossary, and additional recommended book and website resources.

Quill says: This book will appeal not just to the pre-teen/teen market, but to everybody who loves animals.