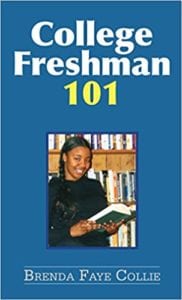 When College Freshman 101 arrived at Feathered Quill, I was excited to see it and grabbed it for my review stack. Back in 2011, I had read the first book in this planned trilogy, Almost a Senior, and found it a very enjoyable read. I was eager to learn what happens to the protagonist, Loresha Evans, as she embarks on her college adventure.

We first met Loresha when she was a junior in high school, in Almost a Senior. Loresha, a young woman growing up in Harlem, might have been marked for failure by many, but they didn't know how strong she was, nor how determined she was to get what she wanted. She knew that graduating from high school was necessary to set her on the path to reach her dream of going to college, and so, throughout the first book, we follow Loresha as she struggles, and prevails.

Now, in College Freshman 101, we catch up with Loresha once again, this time as she prepares to leave the streets of Harlem for the lush, green grounds of a beautiful college in Massachusetts. Saying good-bye to her family and friends, Loresha makes the several hour trip to her new home, at Jackson College, where everybody seems to fit in except her. The first thing that Loresha notices is that the school is predominantly white. Will Loresha find a place at her new school?

Loresha's roommate, Cookie, starts off by annoying her without even trying - 'Loresha' seems too long a name so Cookie calls her 'Lori' and when that doesn't work, 'Whatever' seems to be the new name. Loresha is unhappy to say the least, but when she ventures outside, she spots "Another Black student...maybe I would make it here after all."

Loresha soon finds several friends among the small Black and minority population at school. Eager to fit in, she goes along with them as they steal money from the library's copier machines. Loresha is hesitant to go along, but when the others in the group encourage her with lines such as, "We're not stealing. We're on financial aid," she gives in and acts as a decoy while others take the money. While Loresha makes some bad choices, she also makes some decisions that show she is maturing. Anxious to earn some money, she takes on a work-study job recording the life stories of Black people working in the area. And while she does party hard, she also is quite serious about studying. That determination to get good grades is also what leads her to a tutor, Walke Simms, a handsome graduate student. Loresha is immediately drawn to the young man, but is he falling in love too or just using her?

Told in the first person by Loresha, I was instantly drawn into College Freshman 101. While I honestly can't relate to the trials that Loresha was going through because our backgrounds are vastly different, the author did such a good job of writing a well-fleshed out main character, that I truly was interested in Loresha's life. When she helped steal the copier money, I found myself cringing, hoping that she would see the mistake she was making. Other characters, too, were well crafted - I particularly liked the way Loresha's relationship with her roommate Cookie changed over time. And while the new college student fell for the hunky graduate student's claims of everlasting love, many readers will undoubtedly scream at Loresha not to fall for his sweet talk. While there were a few spots where the dialogue was a bit strained, overall it was a very satisfying read and I truly enjoyed catching up with Loresha. I look forward to meeting Loresha again in the final book in this enjoyable trilogy.

Quill says: New friends, life lessons, heartache and joy await Loresha as she embarks on her first semester of college. It's a journey she won't soon forget, and I suspect that for the reader, the story will also linger long after the last page is read.