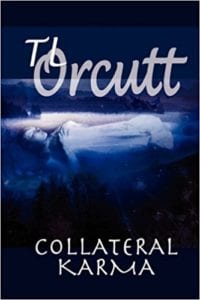 In his past life Rickshaw Lubowski had been a highly successful biochemist, but his luck had changed and the only chemistry he was interested in for the past eight years was hidden in the darker side of life. Yes, he had to admit women were included in the equation as well, but aside from those he’d tossed aside the only one of interest was his fiancée, Natasha. His occult advisor was a mystic by the name of Jamayah, who entered his life when his world came crashing down around his head. No wife, no job, no nothing, save a guy who offered him an “occult apprenticeship” and a new chance at life . . . or at least a chance to salvage what was left of it. He often reminisced about the good old days with his friends at Sigma Nu Mu where he’d gotten the nickname, “Rickshaw,” when he won an innocuous cart race. “The Posse,” a small stick-together-for-life group, were in and out of his life now, just like Jamayah.

Jamayah, who really wasn’t fooled, knew Rickshaw by the name of “Bob Kramer,” an old friend who had passed on to the other side courtesy of a drunk driver. He’d actually paid Bob to take a physics test for him. Collateral karma or was it? Bob was dead and he was living, if you could call it that. What goes around comes around and around and around. For a Berkeley graduate he wasn’t much better off than Brodie, a member of "The Posse," whose idea of living it up was being a beach bum. It wouldn’t be long before he needed more than his terra firma advisors because his dream of Natasha’s death could suddenly turn into reality, a reality that would take on nightmarish proportions. An ambulance sped by him and unexpectedly a hand waved to him to follow it. What for? Was the motion simply a figment of his imagination?

Dr. Liverpool approached the body, a body Rickshaw had just cradled in his arms. The medical examiner was blunt and simply said, “I am a forensic pathologist with particular expertise in investigating violent, sudden and unexpected, suspicious or unattended deaths. I need to examine the body to determine the cause of death.” (pg. 25) But Natasha wasn’t dead. It was only a dream, but was it a dream he himself would bring to fruition? Rickshaw had been dabbling in evil and Natasha would have to pay. He had joined a “rebel sect of The Order called the Alliance.” They “conjured spells and manipulated psychic forces through the magical use of symbols and spirit invocation.” (pg. 79) A brief encounter with fortuneteller Crystal Meadows, who placed a Tarot spread before his frightened eyes, could easily see that the Alliance had put a curse on him. “A curse is a solemn utterance caused to invoke a supernatural deity or spirits aligned with the curse’s purpose . . . ” (pg. 116) Would Jamayah be able to help him? Could any sorcerer reverse this spell? Was this the true meaning of collateral karma? Was this "Destiny's Plan?"

This is a mesmerizing journey into the dark recesses of the mind and world of black magic, cults, and the hardcore sorcerers engaged to battle their curses. This is not a tale for the casual reader, but rather one for the “thinker,” the person who seriously wishes to ponder the worlds of the occult and the paranormal. At times I had to pause and think about what the author was trying to convey as the protagonist, Rickshaw, thought about his life and role in The Alliance and his apprenticeship learning about the real meaning of life with Jamayah. The tale is interspersed with metaphysical philosophy that the New Age reader will thoroughly relish. Although the read was fascinating, had the book been properly edited it would have been more enjoyable. Collateral Karmais like the magnificent tale of a comet . . . you’ll speed though the universe never knowing quite where your journey will take you.

Quill says: If you have a serious interest in the outer reaches of the world, the paranormal and the occult, this is a book that will pique your interest and widen your eyes!

For more information on Collateral Karma, please visit the author's website at: www.tlorcutt.com