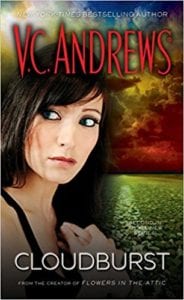 This is the second installment in the brand new series that ‘V.C. Andrews’ has brought to the reading public. In the first book, Family Storms, readers met Sasha Porter - a fourteen-year-old girl who lost her mother when they were both out on a rainy night and were hit by a car driven by a drugged-out teenage girl named Kiera.

When Sasha woke up in the hospital, that same teenage girl’s mother was there, and ended up taking Sasha home with her and giving her a life of wealth that Sasha had never dreamed of. The mother was a little ‘odd’ to say the least, and wanted to use Sasha to replace her own young daughter who had passed away.

Years later Kiera, the oldest daughter is now out of the mansion and attending her ‘charm school’ college. Kiera and Sasha have become friends - sort of - even after all the trouble they went through with each other when Sasha first moved into Kiera’s life and stole her thunder.

Sasha has moved on, too. She is actually celebrating her seventeenth birthday by receiving her very own BMW. Although still being spoiled rotten by Mrs. March, no matter how hard she tries Mr. March still looks at her as an orphan. In fact, he still makes her feel like an outsider trespassing on his family and his money.

Sasha has become strong and beautiful and truly feels like she is going to have a great future, even though her past was a nightmare. She does, however, think about her mother’s words - when she warned Sasha never to trust anyone.

Her boyfriend is Ryder Garfield, a young man who is a top athlete and everyone’s friend. He’s also a shy guy who every girl wants to be on the arm of, but he soon finds a way into Sasha’s heart. In the blink of an eye happiness turns to heartbreak once again in Sasha’s world, and she finds herself wishing that she had died that night with her mother on the street.

Yet again, the ghostwriter who has been writing as ‘V.C. Andrews’ since the author’s death in 1986, is making sure to follow the ‘formula’ that made Andrews a star. A mystery, a tragedy, intrigue and dark, family secrets all blend together to offer an entertaining story that will make readers crave the next novel in the series.

Quill Says: Another V.C. Andrews’ series that will have young readers very happy.