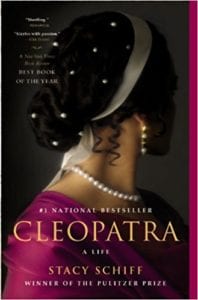 Full disclosure: My Ph.D. dissertation (Southern Illinois University at Carbondale, 1976) was an examination of the persona of Cleopatra in the plays in English about her from 1592 to 1898, including the famous plays by Shakespeare, Dryden, and Shaw. While Stacy Schiff uses the same resources I did—primarily the Roman and early Christian propagandists—she also has the advantage of books published as recently as 2008. The level of her scholarship is one thing that makes this book so good. It includes maps of Alexandria and the Mediterranean world in Cleopatra’s day, extensive notes, and color plates of statues and coins that show us what the queen may have looked like. Some years ago there was a movement to reclaim ancient Egypt’s people and civilization for sub-Saharan Africa. It’s possible that the pyramid builders were black Africans, but Cleopatra was no more Egyptian, Schiff writes, than Elizabeth Taylor. The queen was Macedonian Greek. The founder of the Ptolemaic Dynasty was a childhood friend of Alexander the so-called Great and founder of the great city of Alexandria (which is now mostly under water). The Ptolemies engaged not only in patricide, matricide, fratricide, and sororicide, but also in incest; in the opening chapters of Cleopatra, Schiff untangles the history and shenanigans of this dynasty, which puts the Borgias to shame, and describes its long and troubled relationship with the Roman Republic.

Cleopatra is most famous, of course, for her love affairs with two of the most famous and more or less noblest Romans. Julius Caesar put her back on her throne in about 48 BCE after she’d been exiled by her brother (Ptolemy XIII) and his henchmen. She was in Rome in 44 when Caesar was assassinated and sailed home to Alexandria soon after the Ides of March. She probably met Mark Antony in Rome, but she didn’t engage his interest until after he and Octavian (Caesar’s heir) had dispatched Brutus and Cassius at Philippi in Asia Minor. Antony now summoned the queen to Tarsus. Speaking some of the most famous lines in the entire Shakespearean canon, one of the Roman generals describes her arrival there:

The barge she sat in, like a burnish’d throne,
Burnt on the water. The poop was beaten gold,
Purple the sails, and so perfumèd that
The winds were love-sick with them; the oars were silver,
Which to the tune of flutes kept stroke, and made
The water which they beat to follow faster,
As amorous of their strokes. For her own person,
It beggar’d all description: she did lie
In her pavilion—cloth of gold, of tissue—
O’er-picturing that Venus where we see
The fancy outwork nature (Antony and Cleopatra, II, 2, 191–201).

In the annals of indelible entrances—the wooden horse into Troy; Christ into Jerusalem; Benjamin Franklin into Philadelphia; Henry IV, Charles Lindbergh, Charles de Gaulle into Paris; Howard Carter into King Tut’s tomb; the Beatles onto Ed Sullivan’s stage—Cleopatra’s alone lifts off the page in iridescent color … a sensational, simultaneous assault on every sense. … Often with Cleopatra there is but a slim convergence between the life and the legend. Tarsus is one of the rare points where the two fully overlap (pg. 159).

The events of the final years of Cleopatra’s life, from the Donations of Alexandria (late 34) until her death in 30, were enormously complex. Schiff meticulously combs through the ancient sources to distinguish Roman propaganda from history. At the Donations, Antony gave Cleopatra the title Queen of Kings, promoted Caesarion to King of Kings, and gave their three children lands from Parthia (now northern Iran) to Cyrenaica (now Libya). To say the Donations angered Octavian is a vast understatement; the Roman civil war blazed up again and was not quenched until, following the battle of Actium in 31 from which the queen so famously sailed away, the Romans invaded Egypt and Antony and Cleopatra both killed themselves. With the death of the richest woman in the world, Octavian had no more competition. He renamed himself Augustus and founded the Roman Empire.

Quill says: After you’ve read this beautifully researched and historically accurate biography, have some fun. Rent the bloated 1963 Elizabeth Taylor movie. Play film critic. Comment on the historical errors, the anachronisms, and the utter nonsense.