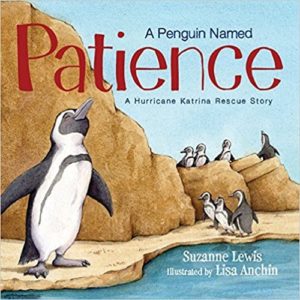 Patience looked a tad worried as she looked around the aquarium from her perch on top of a rock. Well, maybe a lot worried. She was an African penguin and was used to hot weather, but this time it was different. The Audubon Aquarium in New Orleans was flooded and the “aquarium staff was evacuated because of the flooding.” It was dark, terribly hot, and Tom, the penguin keeper and his sardines, were nowhere to be found. Patience wasn’t the only penguin facing this terrible dilemma.

There was Fanny, Ernie, Kohl, Bunny, Amquel, Voodoo (who was “under a spell”), Rocky, Stachmo, Dyer, Zelda, Dennis and many others. Patience was the oldest and had to keep them all in line, but was she patient enough to do it? It was dark and it was getting hotter by the minute when all of a sudden there was a beam from a flashlight. It was Tom! He set up a fan and brought them sardines. Patience snuggled up in his lap as the other penguins clustered around. It looked like they all would have to leave the aquarium, but where could they go?

This is a charming story of what happened to the Audubon Aquarium penguins during Hurricane Katrina children will love. Of course the main character is Patience, the “penguin in charge” and oldest penguin at the aquarium. The aquarium was heavily damaged and once the waters subsided they were going to be relocated to the Monterey Bay Aquarium in California. The artwork is delightfully expressive and very appealing. Young children will be rooting for Patience and all the other penguins as they safely make their way out of the aquarium. There’s an interesting historical note about Hurricane Katrina and the fate of the Audubon Aquarium in the back of the book. Do they ever return home? You’ll just have to read this tale to find out!

Quill says: Young children will love watching the journey of Patience and the Audubon Aquarium penguins as they make their way across the country!