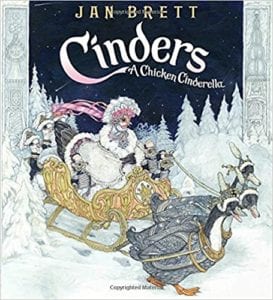 Poor, poor Cinders. She’s a little chicken who gets pushed around by the big, ol’ mean Largessa and her two equally pushy daughters Pecky and Bossy. When the little girl Tasha comes to feed them, Cinders barely gets any food. Those old, grumpy, cruel chickens seem to get all the good eats.

One evening, with a storm raging outside the henhouse, Tasha decides to stay with the chickens for the night and soon falls asleep. As soon as the girl is sleeping, a magical glow descends and the chickens begin talking about the prince’s ball. From this point on, the story follows the familiar story of Cinderella, albeit with chickens.

Cinders is, as expected, made to help Largessa and her daughters get ready for the ball. Once those pushy hens leave, Cinders is left alone – she certainly can’t go to a ball with her tattered clothes and frayed feathers. That is until a beautiful Silkie (a very feathery, beautiful type of chicken) comes to Cinders’ aid and, as a fairy ‘godchicken’ of sorts, waves her magic wand and turns Cinders into a dazzling beauty. Her clothes morph into a lovely dress, her feathers now have a silvery sheen, a pumpkin turns into a carriage and an assortment of little creatures become her footmen, coachmen, and horses (not quite horses, but you get the idea). Cinders goes to the ball, meets the prince, dances, must leave quickly and well, we all know the story – it has a happy ending. The story isn’t terribly original, but the chickens are absolutely wonderful.

The tale starts off slowly, with the girl Tasha going to the henhouse. She doesn’t have any important part to play in the story, other than falling asleep in the beginning and befriending Cinders at the end. The story would have read better to have simply been a tale about chickens. Other than that small qualm, however, I truly enjoyed Cinders, particularly the illustrations, which were amazing.

Quill says: The illustrations are the real stars of this book – they are magical. Combined with a well-known story with a twist, the book will likely find a place on a special shelf in your house.