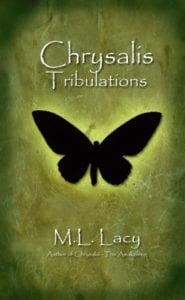 All seems well in Aubrey Campbell’s world. She is at home, enjoying a peaceful morning with Steven, her fiancée. But as the story of Chrysalis: Tribulations unfolds, it quickly becomes apparent to the reader that “Bree” is not an ordinary human. Indeed, she is a very special young woman. Born a mortal, she has recently discovered that she is a ‘Chosen One,’ a magical person with inordinate powers. She is just learning to use her powers but unfortunately, Esmeralda, a sorceress from the magical realm, desires both her blood and soul.

Chrysalis: Tribulations is a classic good vs. evil story with Bree and her clan of vampires fighting for all that is good in the magical world. Bree’s arch nemesis is Esmeralda, a nasty, cunning sorceress who will stop at nothing to destroy Bree.

Fighting with Bree are the members of her clan, including Steven, her fiancée as well as Bradley, Bill and Rick. These men have sworn to protect Bree at all costs and because they’re vampires, they certainly have the capabilities to fend off attackers. Of course, what clan would be complete without a matching group of women, um, vampires. As the newest member, Bree would typically be subservient to other members but because of her status as the last ‘Chosen One,’ she has been made Alpha (clans are matriarchal). This title does not sit well with other female members of the clan, resulting in a bad case of jealously from some of the women clan members. Add to this the fact that in the magical world, Bree is expected to be intimate with all male protectors in her clan. The young woman has her hands full, and that’s before attempting to deal with Esmeralda.

While Bree does her best to adjust to the ideas of the magical world and unusual (to her) rules of her clan, Esmeralda is busy planning her attack. She has enlisted the aid of Thomas, a traitor to his clan. But wait! Is he a traitor? We’re just not sure what side Thomas is on and neither is Esmeralda.

As Esmeralda devises a way to capture Bree, the 'Chosen One' is busy trying to deal with her growing powers. She has frequent dreams in which she is taken to mysterious and often dangerous places, such as a dark passage where somebody or something whispers her name. Bree soon realizes that it is a demon and is frightened to the point of foregoing sleep. “The dreams come to me when I sleep; I never rest anymore…the demon tried to break into my thoughts nightly. I struggle to keep him away…I hear him call to me, I hear him every night. I push him from my mind, but he is there, tempting me. How much longer will this go on?” (pgs. 249-250)

Most of Chrysalis: Tribulations is told in the first person by Bree while a few sections are written in the third person (primarily those dealing with Esmeralda and scenes that don’t involve Bree). The first person telling is part of what makes this book work – the reader sees Bree’s uncertainty and struggles with her growing powers and need to protect her clan. She is torn, repeatedly, when her new family is in danger. The author has created a very likeable character in Bree and seeing her mature and take charge over time is as enjoyable as the fantasy aspects of this tale. Indeed, seeing a woman in charge of a group of men will have many female readers cheering.

There is quite a bit of action in this fantasy novel, with a tear between the magical and “normal” world causing havoc. And for the most part, the author keeps the story moving along briskly although there are several sections where the plot slows, particularly during the many dinner parties/meetings. But these are minor distractions within a story that is a lot of fun to read.

Quill says: Vampires, sorceresses, betrayals, harrowing rescues, rips in the curtain dividing worlds, and a young woman learning to use and control her awesome powers make Chrysalis: Tribulations a story not to be missed by lovers of fantasy novels.

For more information on Chrysalis: Tribulations, please visit the author's website at: author/mllacy