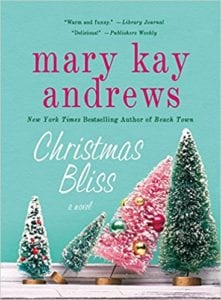 Books by this incredible author are always a delight to read, and this latest tale is no exception. In time for the holidays, this charming novel makes a perfect Christmas present.

Taking place in Savannah, Georgia, readers join Jean Eloise Foley (AKA: Weezie), as she attempts to stand still while her mother fits her with her grandmother’s wedding dress. Weezie is walking down the aisle on Christmas Eve, marrying her longtime fiancé, Daniel Stipanek - and her mother is about to drive her crazy.

But the drama doesn’t end there. Weezie’s best friend and maid-of-honor, BeBe, is about to have a baby but is still refusing to marry the baby’s father; not because she doesn’t love the man, but because she’s had two unfortunate marriages turn sour and doesn’t want to try again.

Attempting to get away from her bossy mom and get to her antique business, Weezie continues to worry about the wedding cake and decorations. The folks in charge of making her Christmas Eve celebration a true fairytale are two men - Manny and his partner Cookie - who own a shop in Savannah called Babalu. Knowing they always go a bit over-the-top, Weezie finds herself having second thoughts about her choice of decorating team.

Daniel, the groom, plays it smart; he’s not around this last harried week before their wedding. He’s working as a guest chef in New York City and is no help whatsoever. Weezie is beyond exhausted to say the least. Dealing with her mother, trying to make sure that the wedding team doesn’t embarrass her completely, and doing her best to console a very pregnant BeBe, begins to get difficult. And just when she thinks it can’t get any worse, Weezie is slapped upside the head with yet another problem she didn’t expect.

This story is truly a breath of fresh air between the overabundance of CSI, cops, vampires, werewolves, and basically overly-dramatic books that are being churned out day after day. Andrews has yet again used her fabulously fun characters that were featured in three previous novels - Savannah Blues, Savannah Breeze and Blue Christmas - to add a bit of sunshine to this ‘dark’ literary world.

Quill says: A wonderful Christmas tale that will warm everyone’s heart. With a great group of people, a stunning wedding and two terrific dogs, who could ask for anything more?