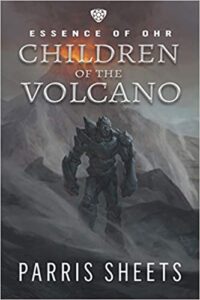 When people complain about sequels (whether it be in response to movies or books), those complaints are usually correct. But...stop the presses! Children of the Volcano is one of the very few that deserves absolute praise and not a hint of complaint. Yes, we are talking about a writer who has put together a tremendously well-written, action-packed sequel. (Go figure, right?)

For those who are not yet familiar with this series, in the first book of this epic tale (Warden’s Reign) readers met fifteen-year-old Kole. In that particular book, orphan children were being taken by the god, Warden, who would then use them in his dastardly experiments. Even the very trees in the forest would be uprooted and allowed to roam free—that’s how eerie this world was. Kole, with the aid of his mentor, Russé, learned how to protect the children and tame Warden’s evil version of Mother Nature, so to speak, at the same time. But when one of Warden’s creatures destroyed the haven that Kole made for the orphans, they had to stand up and fight a battle of monumental proportions.

Now, we enter Kole’s city that has actually seen peace for a time. Yet even though the city is calm, the rest of the world is facing death and destruction. The culmination of the “good” gods is needed in order to put this darkness behind them once and for all. Together, Kole and Russé go on a mission to find the missing gods and stop the evil presence from destroying all that’s left. A cryptic map is the clue that will lead them to the location, yet even though they are successful in deciphering the clue, what they don’t understand is that others have the same mission in mind...and not for good purposes.

With their archenemy closing in on them, Kole and Russé take on a trek that steers them to a forsaken realm playing home to a volcano. With the land around the volcano said to be cursed, readers will stand side-by-side with these heroic characters as they face everything from choking amounts of ash that engulfs the air they breathe, to actual creatures made of stone, in order to reach the very heart of the volcano. Strength, determination, will...all is required to make it through this land and locate the powerful ones that the world so desperately needs for their very survival.

As a reader, it’s quite easy to say that the author writes with a passion that is equal to the creator of Potter and other YA series’ that inflame the imagination. It’s no surprise why Parris Sheets has won awards for this series already, and there’s no doubt she will win many more. Her ability to write about things like restoring life to a cursed, embattled horse to the journeys and emotions of vivid characters like Felix, Aterus, Vienna, and so many more, is phenomenal. You not only can ‘feel’ every step that’s taken in this book, you can visualize every moment. Throughout the entirety of the two books written thus far, you feel like you’re watching them play out on the big screen. All that’s left to say is, hopefully, the ‘big screen’ is where the Essence of Ohr series ends up. (Are you hearing me, Hollywood?)

It has been stated that Book 3 of this series, Beyond the Flame, will be released in 2022. That’s the good news. Bad news is having to wait until then to once again dive into a YA masterpiece that provides over-the-top, fantastical characters, plots and scenes from beginning to end.

Quill says: Captivating is an understatement. This series has rightfully carved its niche beside some of the most popular YA’s written. I see an “Ohr” theme park in our future. Bravo!

For more information on Children of the Volcano (Essence of Ohr, Book 2), please visit the author's website at: parrissheetsauthor.com