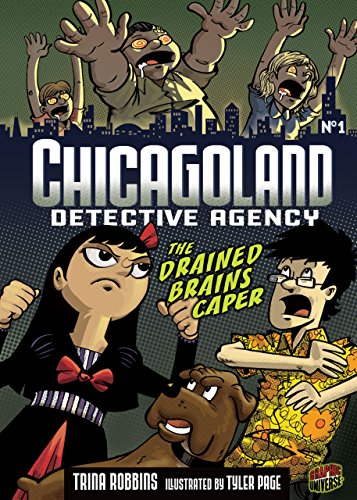 Raf Hernandez was not at all happy when Megan Yamamura walked through the door of his Mom's pet supply store saying, "I want to buy a tarantula." Duh, there was a big sign in front of the cash register stating they didn't sell animals. His mom always said, " . . . nobody has the right to own another living creature" and that included not selling them. Megan annoyed Raf even more when she told him she was "politely asked to leave" her old school, was into haiku and read manga. TMI and he wanted her out of there. Out she went and it wasn't long before she was walking the halls of Stepford Preparatory Academy going to summer school.

All the kids at that academy looked and acted like a bunch of zombies and even had bandages plastered to their foreheads. They were totally model students and enough to make anyone barf. Speaking of which, the lunches were horrid and there was no way Megan would even touch them because she was vegan. Sloppy Joes were simply out of the question, to say nothing of liver and onions. After school she was off to see Rav and ask him for his cell number and email. He started to warm up to her when she told him how she "totally got expelled from school" for burning her haiku in the girl's room. How cool can it get?

It wasn't long before she got into trouble in her new school and her father had to take her to have her head examined at Dr. Vorschak's. After she got rid of her dad, the evil doctor injected her with a knockout drug and had her gagged and bound to a table. The lunatic began to talk about her master plan to make Megan into a model citizen along with the rest of the zombies at the Academy. It would be easy. Dr. Vorschak sneered and said, "A simple nip in the prefrontal lobe of your brain, a tuck in the left and right sides of your head, a squirt of sheep genes in the lymph nodes . . . and you will become a model junior citizen." A mysterious caged mutt was watching carefully as the scene unfolded. Megan began to text a haiku to Raf. Would he be able to rescue her before she got that prefrontal lobotomy? Just what did that mutt know about what was going on at the Academy?

Megan, Raf, and "doggy Einstein," Bradley, meet up to solve a fabulously freaky mystery at Stepford Academy. Typically manga is drawn in black and white and I found this to be particularly appealing. This book, the first in the series, introduces Raf Hernandez and Megan Yamamura, who quickly become best friends. To add to the mix is "doggy Einstein," Bradley. Together they form the Chicagoland Detective Agency. I loved the way this mini manga mystery unfolded so smoothly and would love to read the next one in the series. Of course the Chicagoland Detective Agency claims there is "no case too weird" for them to tackle. "The Maltese Mummy" is the next one up in the series and if it is as good as this one (weird and nicely wacky), this series will be a hit!

Quill says: Even the most reluctant reader will be turning the pages quickly in this book to find out just what is turning all the kids into zombies at the Stepford Preparatory Academy!