Charlie’s Tale: The Great Questions of Life and Death 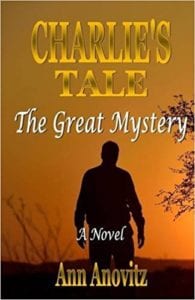 Charlie's Tale: The Great Questions of Life and Death

The timeless question of what happens after our death is one that has intrigued mankind for thousands of years. Author Ann Anovitz weaves a story that attempts to shed some light on this intriguing question with Charlie's Tale.

Charlie's journey starts as he is enjoying a baseball game, about to eat a hot dog and then unexpectedly everything goes dark except for a few spots of light that he can barely make out. As his vision gets better he realizes that there are hundreds of bright balls of light all around him, each a slightly different color. Suddenly a person appears in the distance and as Charlie comes closer he realizes that he is looking at his own father, but his father passed away a few years ago, so how could this be?

As Charlie begins to pepper his father with a ton of questions, his father explains to him that he had a heart attack while at the baseball game and is on his way to heaven. However, before Charlie can get there he has to learn a few lessons about what it really means to live a good life. As Charlie takes a second to look back on his life, he knows he made mistakes along the way, but he always thought that he was a good person. As his journey progresses, Charlie will realize that there were many things he took for granted in his life, things that he should have known to pay attention to and respect.

The first step is to travel to two different worlds, each very unique in how the planets' inhabitants live their lives. Each world forces Charlie to think back to his life on Earth and see the similarities. Next, Charlie is sent back to Earth but he does not go back as himself. In order for him to realize the important things in life he is sent back to various points in history, each time as a different person. He goes back to the time of the Civil War, as an orphaned young boy taken in by a farming family; sent to China as a young girl, and then spends some time in the woods as a deer. Each lesson pushes the limits of Charlie's ideas about how he lived his own life, and what he would have done differently.

This book started out to be quite intriguing for me. I was drawn into the story and was curious to see the main character of Charlie travel to two very different worlds. The author's creativity in creating these two planets was quite enjoyable. However, for me the story began to take a turn when Charlie journeyed to China. It was at this point that the story shifted from a journey about Charlie to more of a lesson about different cultures. There was an immense amount of information on different religions and I felt I lost touch with the personal journey of the character. While it was interesting, that transition made for an unsatisfactory reading experience as the story, about a man's journey, got sidetracked.

Quill says: A book with an interesting topic, but with a story that fell short for me.