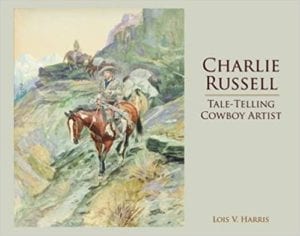 Charlie Russell was a dreamer and that dream didn’t include sitting at a desk learning things from a book. His idea of living was stealing away to the “St. Louis, Missouri docks to hear frontier stories about gun-shooting bandits, grizzly bears, and hungry wolves.” The West called to him at an early age and even a whipping for skipping school couldn’t deter him. Men who had experienced the wild West in one way or another were telling their tall tales on those docks and one eager young boy was listening closely. Playing “Settlers and Injuns” with his siblings was only a small indication of the life long love he would have for a place that he would one day introduce to the world through his art.

Materials for producing clay figures were readily available to Charlie because his family owned a brick factory. A passionate love of art was evident at an early age and, on one level, a tool with which he could bribe his fellow students into doing his homework. He evidently found out that clay or wax figurines made for excellent bartering material.

Some people outgrow their dreams, but not Charlie. When he was fifteen, he left home when “his parents got a job for him on a sheep ranch.” Art supplies in hand, he “rode a stagecoach over 1,800 miles to Montana territory.” In this marvelous book you’ll be able to follow the dream of the West that Charlie Russell never gave up and “listen” to his story by looking at his artwork.

This is an amazing tribute and introduction to Charlie Russell, whose artwork symbolizes the West of yesteryear. There are numerous full color reproductions of Russell’s work, including several photographs of him and his family. One of the more interesting photographs is one of him as a young boy, fully outfitted in his cowboy gear. The determined look on his face says it all. Although this book was written with a younger person in mind, it will appeal to all ages. This portrait of a tale-telling cowboy artist, an American great, would make an excellent addition to any homeschool, art room or library shelf!

Quill says: This timeless tribute to one of America's most beloved Western artists would be a wonderful addition to any art book collection!