Center of Gravity: One woman’s experiment to reinvent her entire life through creativity, spirituality, and a leap of faith 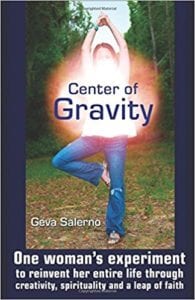 Center of Gravity: One woman's experiment to reinvent her entire life through creativity, spirituality, and a leap of faith

Perhaps when we begin to recognize and pinpoint the exact issues we are struggling with, it’s then we can begin to move forward. Geva Salerno was struggling with addiction, one whose tentacles began to eat into everything around her, including her relationship with her family. Everywhere she looked her addiction was staring her in the face, beckoning her to feast at the table. Geva need only spot a handsome man and her mind would begin to churn, thinking of a future with him, a possible marriage. Rationally her behavior was ridiculous, unconscionable, yet the addictive thoughts continued. Geva made up her mind to put a halt to this ever-churning nonsense, but asked herself “Would I really be able to break this addiction?”

Perhaps she could defeat her self-defeating addiction to dating and there was only one way to do it. Geva had to table dating and one solid year just might do it. She’d already married Carlos on a whim without really getting to know him and a quick divorce told her something. There would be no “Carlos situation” ever again if she could help it. “I have to get hold of my life,” Geva said to herself, but what to do? She began to explore the possibilities around her. It was imperative that she dump the neediness, her addictive need for men, and replace them with things that would add meaning to her life. “Mom, I’ve decided to take this year off from dating,” but Geva soon began to wonder if she could keep that promise to herself, let alone anyone else.

Geva began trying to reclaim herself by taking up guitar, trying to revitalize her interest in painting, becoming more active in drum circles, and taking spiritual vacations. Her roving eye quickly threatened to defeat her project as she spotted men who could easily be dating prospects. She couldn’t even seem to manage making it through that spiritual vacation without spotting a “possibility.” Geva later pondered the situation thinking, “What do they have that we need so badly that it throws off our center of gravity?” Her experiment seemed hopelessly doomed from the start with that seemingly endless addiction to dating. The months began to slowly creep by, months that sometimes felt as if she were climbing up the sheer face of a mountain. Would Geva plummet into a crevice of no return or would she discover herself in the process?

We’ve all had periods in our lives when we’ve had to step back and examine our behaviors and addictions, things that impact everything around us. It wasn’t particularly far into this book that I began to notice something. That something was that this book was written from the heart. Geva mentioned the fact that she’d explored the possibility of hiring a ghostwriter, but that would, in my estimation, have destroyed the journey. The book lacked the polish it might have had, but instead became quite poignant. It was as if Geva, through her journal entries and conversational style of writing, asked me to examine my own life. The more I read, the more I could relate. The beauty of this work was not to be found in the polish, but rather the shine.

The issue of one’s “center of gravity” and what that meant didn’t come up until the latter part of the book. This isn’t a book that I wanted to race through in a day or two, but rather one I chose to read slowly and think about. Geva mentioned that she’d get “these mad crushes, which last for a day or so and then disappear.” Trying to rid herself of this addiction was obviously not going to be easy. At times the reading seemed slow, but forced me to reflect upon what was going on in her life and how one journeys through the addictive process. There was and is a lot of pain trying to elude the grasp of addiction, but the honesty of Geva’s journey made the book all the more meaningful.

Quill says: If you too are struggling with addiction of any sort or want to change your life, perhaps taking a walk with Geva will help you move on.