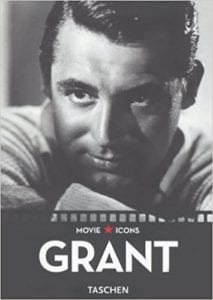 That voice. Those looks. The suave, self-confident manner. Humor and perfect comedic timing. All that was Cary Grant is brilliantly captured in this photobiography of the Hollywood star, part of the Movie Icons Series published by Taschen.

This biography begins with a short, two-page overview of Grant’s life, highlighting the most important aspects of his personal and professional life. As most fans of this Hollywood icon know, he was born Archibald Alexander Leach in 1904, in Bristol, England. When he was nine years old he was told that his mother had died. But in truth, she had been wrongly committed to a mental institution. Learning the truth some nineteen years later (and securing her release), his mother’s “death” and subsequent confinement had a profound affect on the actor’s life.

Leach came to the United States in 1920 and traveled throughout America with a vaudeville act. Signing a contract with Paramount Pictures in 1931, the young actor changed his name to Cary Grant and the rest, as they say, is history.

The bulk of the book is filled with fabulous photos of Grant’s career, from his uncredited appearance as a sailor in Singapore Sue (1932) to his last movie, Walk Don’t Run (1966). These photos are a visual treat for fans of Cary Grant, and even the rather strange photo of Grant dressed in a turtle outfit for Alice In Wonderland (1933) is a treat.

Like the other books in this series, the text is written in English, French and German. The majority of the photos are stills from movies, there are very few candid photos and those too, are from Grant’s movies, not his personal life. Along with the movie stills are “Lobby Cards,” magazine covers and posters. At the end of the book is a one-page biography of Grant's life, noting dates of marriages, divorces, important roles, and other significant events. This is followed by a filmography, noting each movie's title, release date, and director.

Along with the photo captions, the author has included numerous quotes, most from Grant himself, although there’s also a spattering of comments from friends and colleagues. “My formula for living is quite simple. I get up in the morning and I go to bed at night. In between, I occupy myself as best I can.” – Cary Grant. From Alfred Hitchcock, “One doesn’t direct the marvelous Cary Grant, one simply puts him in front of a camera and lets the audience identify with him.”

Quill says: A photobiography of Cary Grant, which is a must-have for all true fans of this classic Hollywood star.