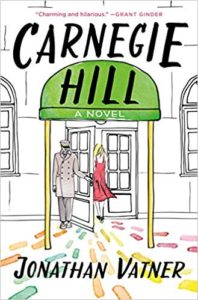 Jonathan Vatner pens a delightful twist toward the life of privilege in his debut novel, Carnegie Hill.

Penelope ‘Pepper’ Bradford is the epitome of Upper East Side privilege. She could want for nothing and quite frankly, has never wanted for anything. Lately, however, she wonders if her fiancé Rick Hunter, a successful financier, is the man she is destined to live happily ever after with.

Chelmsford Arms, Carnegie Hill, is a posh co-op where debutante Pepper Bradford and her fiancé/paramour, Rick Hunter, hang their respective hats. Pepper needs something more to do than spend Rick’s money; not that she doesn’t have plenty of her own to spend. Regardless, she needs something to occupy her time and talents. When the opportunity presents for her to join the prestigious board of their co-op, she welcomes the adventure. Finally, something Pepper can do on her own without the scrutiny and controlling direction from mumsy or daddy.

At Pepper’s first meeting, she meets the eclectic group of board members. Patricia, President of the board and certainly the matriarch. It’s immediately clear she is firmly planted in the position and no one is going to dethrone her even if there’s a unanimous vote to do so. Frank and Carol are long-time residents and Pepper experiences an instant liking to Frank thanks to his animated way of calling things as he sees them. Birdie and George are a bit of an odd couple—Birdie a perfect depiction of her petite, bird-like frame which is the exact opposite of her counterpart George who towers over her. The meeting is called to order and Patricia wastes no time in reminding all parties the rules of order.

Beyond Pepper’s occupation with her newfound board duties and responsibilities, life with her fiancé is unsettling. Of course, she adores him with all her might, but there is an intangible sense of something being amiss that she can’t quite put her finger on. Her father is accepting of Rick, for the most part. Her mother, however, makes no bones about the fact that Pepper is making a big mistake if she marries him. There is a notion of credibility to her mother’s apprehension given Pepper has a trail of failed relationships in her wake. Incensed by the unsolicited opinions of her mother, Pepper opts to move full speed ahead with wedding plans even if her parents opt to sit out the happy occasion. The closer Rick and Pepper get to their momentous day, the more subtle signs are present. There is no denying that nobody is completely perfect, but it would behoove Pepper to heed some of her parents’ warnings. When she casts aside the increasing intuitions and seals husband and wife with a kiss, happily ever after may not be the end of the story for Rick and Pepper.

Jonathan Vatner’s journalistic credentials speak for themselves when it comes to his accomplishment as a writer. That said, I thoroughly enjoyed this debut novel. The characters are beyond rich and own their unique idiosyncrasies and over-stated privileged personas. The many side-plots and adventures throughout this read are superb and Vatner ties all loose ends together in a delicious, page-turning adventure for his audience. I love how this story willed me to keep turning the pages with little to no effort as there are plenty of sparks flying off the pages along with laugh out loud moments throughout. I am a fan Mr. Vatner and look forward to the next adventure you will undoubtedly deliver.

Quill says: Carnegie Hill is one of the best ‘beach reads’ I’ve come across in quite some time. This is a must have in your beach bag this summer.