Can You Tell a Horse from a Pony? 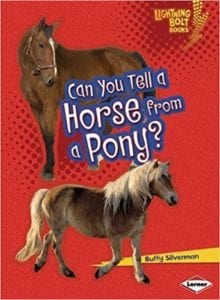 Can You Tell a Horse from a Pony?

If you take a look at a picture of the head and shoulders of a pony and a horse standing side by side, you may have a bit of trouble telling the difference between them. They are similar in that they both have manes, tails, and enjoy eating grass, but there are some noticeable differences. The pony has “short, strong legs” while the horse has long ones. There is also a difference in height. For example, an adult horse is “fourteen and a half hands or taller,” while the adult pony is less than that. If you care to do the math, a “hand” is four inches or ten centimeters high.

When you look at the bodies of a pony and a horse and compare their width, you’ll see that the pony is wider. Horses have been helpers and some of them were taken to “dry, rocky places.” In time they adapted to climbing rocks and “became smaller and tougher.” These horses were later called ponies. There was sometimes a difference in climate and ponies ended up with “thicker manes, tails, and coats.” In this book you’ll also learn about the kinds of work both animals did, how some were used for sport, how they keep themselves safe, you’ll read about wild horses and ponies, and will read many other interesting things about these appealing animals.

In this beginning nonfiction chapter book, several differences between the two animals are pointed out, but there were several other interesting facts that I liked to see. For example, we get to learn several historical facts, get to see some very high interest photographs, and learn small vignettes such as what withers are. This is the type of book that a newly independent reader would have fun tackling with a bit of assistance from a peer reader. The book is generously illustrated with photographs accompanied by interesting captions. In the back of the book is an index, a glossary, a section on Fun Facts, and additional recommended book and website resources to explore.

Quill says: This is a fun book that will help younger children tell the difference between the horse and the pony.