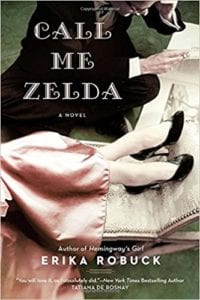 In her latest novel, Call Me Zelda, Erika Robuck easily entices the reader with wonderfully eloquent prose through an intriguing account of the tumultuous life of Zelda Fitzgerald, wife of the iconic F. Scott Fitzgerald.

In February, 1932, Phipps Psychiatric Johns Hopkins University Hospital was about to receive a very famous patient. As F. Scott Fitzgerald stays behind in the administrative offices to complete the last of the paperwork necessary to commit his wife Zelda, Nurse Anna Howard gingerly guides Zelda to her room. It was more than a room, it would be Zelda’s home for however long it would take to try and piece the broken parts of Zelda back together again. Gone was the glorious spark in her eyes and exuberant effervescence from her soul. The infamous flapper girl of the 20’s was buried somewhere in the depths between calm and rage as much as she was in battle with the voices in her head. How had this woman become so broken—the woman who managed to usurp the heart and every other facet of the elusive and great F.Scott Fitzgerald?

Nurse Anna Howard has been assigned to the day-to-day care of Zelda. The question arises early on: Is the healing process solely for Zelda or perhaps it is for both women. It seems Anna’s once perfect life was ripped away too soon when her husband Ben went missing in action, never to return from the war. To compound her loss, her daughter Katie died of pneumonia at the tender age of five. Caretaking is not foreign to Anna given it was her credentials of a wartime nurse at Walter Reed Hospital that landed her the permanent position of psychiatric caretaker at Phipps. In a kindred sort of way, the brokenness of Zelda and the heartache of Anna collide and the divinity of healing however great or small begins. In time, Zelda allows the veil of her catatonic disconnection to drop as she allows Anna in. The essence of Zelda’s break is her escalating paranoia and belief that her beloved ‘Goofo’ (Scott) has stolen her stories and made them his own. She convinces Anna that Scott stole her precious diaries early on in their union—diaries that portrayed the philandering, outrageous parties and reckless abandon they willingly embraced during post war depression and prohibition. Perhaps the location of the ephemeral diaries is the key to not only free Zelda from the crazies, but allow Anna to live her life to the full extent it was destined to do so. And just exactly what role did the great F. Scott Fitzgerald play through it all?

Ms. Robuck not only possesses a beautifully romantic style, but her true passion toward her subject matter rises from the pages as well. She draws the curtain back and reveals the life and times of Zelda Fitzgerald. There is melancholia as much as shock and she tempers the tone with superb storytelling ability. Her prolific and poetic way of describing a scene goes far beyond: It was cold. Rather, passages such as "...Though it was the end of February, the day was a lazy sort of cold. The sun slipped through the clouds in bursts, reminding the landscape that it was still there..." are plentiful throughout this read. As admirable as her ability is toward storytelling, Ms. Robuck deserves recognition for her astute research of her subject matter before tackling the writing of the greatness of both Fitzgeralds. However, she never confuses the storyline or falters from her devotion of reserving center stage for Zelda, an intriguing woman of substance. Ms. Robuck has delivered a bittersweet read and leaves the reader with a strong sense of being in the very moment in time from the story’s beginning to its surprising end. Keep writing Ms. Robuck. There are far too many greats whose stories beckon your pen to write.

Quill says: If you’re looking for the perfect escape into yesteryear, grab a spot in the shade, a lazy afternoon and without question, a copy of Call Me Zelda.