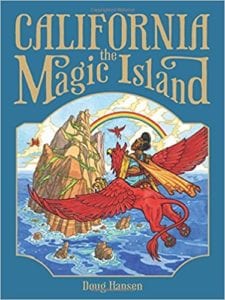 Queen Calafia sits upon her throne, more than a little agitated that someone had the nerve to title a country using the name of her own magnificent island. She is the goddess of her world – a world that has it all. She has gold, money, power and is THE legend, THE heroine of the 16th century (when it comes to Spanish romance, of course). And although many would like an island named after them to honor their beauty or power, Calafia is different. What possible land mass that is not her own, even if the stories are true and this new place called “California” is so rich and wondrous, could possibly rise up to her stature? So how does a queen, who is a fair queen, find out more about this mystical place she’s never before seen? How does she come to terms with the fact that strange soil and her royal island are being used in sentences together? Should she destroy this place? Well...she just might, if someone cannot tell her more.

Enter...the animals. Queen Calafia commands wild creatures be brought to her to tell her all there is to know about this land. Since humans are not allowed on her island, only nature’s creatures can visit. From reptile to mammal to bird, creatures are called to the queen’s court from California to tell her the stories of this place, to make her understand how extraordinary it is. What comes next is a slew of history – a slew of very cool, very real stories that have been placed in history books and show everyone exactly how amazing California and all its legendary stories are. The albatross tells of his birth on Wake Island in 1940; the Kodiak bear speaks of his escape from poachers in his own country to find tranquility and peace in the San Diego Zoo. The yellow-bellied marmot brings the beauty of Yosemite alive.

From the famous La Brea tar pits to Death Valley to the Pony Express, and on to the Forty-Niners (gold, that is – not the NFL), the legendary events are fun, enchanting and absolutely unforgettable. Combine these tales with the most beautiful, detailed pictures you can imagine by author Doug Hansen, who is a professor of illustration as well as a newsroom artist, and California, the Magic Island quickly becomes one of the few “staples” on your child’s bookshelf.

Quill says: You do not need to come from the state of California to enjoy this absolute masterpiece that will thrill and excite both children and parents.