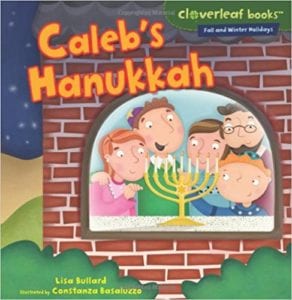 Caleb practiced spinning his dreidel while his parents peeled and grated some potatoes so they could make latkes. Hanukkah was coming up and he was determined to win. Dad started to tell him the Hanukkah story while he practiced. It all began more than two thousand years ago when a “Greek king named Antiochus IV made it against the law to practice the Jewish religion.” The Jews' eye’s widened and they clasped their hands over their mouths as the soldiers put a figurehead of Antiochus on their altar. Of course there were some who fought back even though they were smaller in number.

They won and were once again able to practice their religion even though the king had forbade it. Nothing would stop them and so they studied in secret. In the history it was said that “the Jewish people then pretended they were just playing dreidel.” After they won back their temple they cleaned and scrubbed and “they lit the temple’s special oil lamp.” There was only oil for one day, but then a miracle happened! It burned for eight days and “that’s why we celebrate eight days of Hanukkah.” Caleb’s dad told him all kinds of things about the history of Hanukkah and his dreidel. He smiled to himself and wondered what would happen during the celebration. Would he win when they played dreidel this year?

This is a fun, historical look at the history of Hanukkah for young children. Caleb is a young boy just starting to learn about the celebration from his parents. As he plays with the dreidel his father begins by telling him the history of Hanukkah. He tells Caleb about Antiochus IV, how the Jews were persecuted, how they fought back, the miracle of the “special oil lamp,”and what the marks on his dreidel mean. There are several other aspects of the celebration young ones will learn as Caleb celebrates with his family. There are numerous informative sidebars confident readers can learn from. For example, one says “After the Jewish people cleaned the temple, they dedicated it to God. The word ‘hanukkah’ means ‘dedication.’” In the back of the book is an index, a glossary, instructions for making a milk carton dreidel, and additional book and website resources to explore. There are free downloadable educational resources on the publisher’s website.

Quill says: Caleb's Hanukkah is a perfect book to introduce young children to their religious heritage!