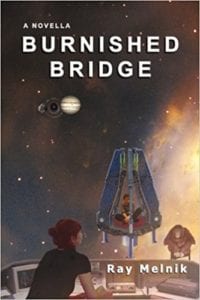 Dr. Alex Dael is a brilliant physicist who, from the outside, appears to have everything a man could want. He has a great job, a nice home, and good friends who care about him. But Alex knows that there is more to life – he wants somebody to share his life with; somebody to love.

Alex works at SciLab, a facility that specializes in cutting edge science. Like his colleagues, Alex’s research could profoundly affect the lives of millions of people. The forty-four-year-old scientist is leading ‘Project Glint;’ a project that could one day lead to teleportation. The research promises such amazing results that even the Department of Defense is interested. Dr. Elina Maina, another talented scientist, is Alex’s co-worker, a young woman who is happily married with two adorable children. Elina cares deeply for Alex and would love it if he found somebody special but Alex isn’t sure there is anybody “out there” for him.

One day while having lunch at the local tavern, Alex and Elina overhear a conversation between an attractive young woman and her boyfriend. It is quickly apparent that the boyfriend is possessive, overbearing, and possibly abusive. Alex quickly steps in and asks the man to calm down. In reply, the obnoxious boyfriend tells Alex to “mind your own business.” (pg. 15) When the tavern’s owner asks the man to leave, the woman stays behind and thanks Alex for his help. She introduces herself as Janine and the two are soon sharing daily lunches at the tavern.

Alex falls hard for Janine and is tormented at the thought of her being abused by her boyfriend Cale. Yet, Alex is convinced that a woman as young and attractive as Janine (she’s in her late twenties) could never fall for an older man like him. Even with Elina and Brice, the tavern owner, trying to get him to ask Janine out, Alex refuses to even try. Instead, Alex makes a life-altering decision, something so frightening, yet, to a scientist, so cool, that the reader is torn on whether to cheer him on or scold him for running away.

Burnished Bridge may be a short novella (61 pages), but a lot happens within those few pages. The story picks up immediately, with an overview of Alex’s life and his research project. It doesn’t take long to get drawn into the story and the possible outcomes of both Alex’s research and love life. While research progressed at an unrealistically fast pace, the science was not hard to follow and offered a fascinating look at what many hope will be a future means of transportation. It is important to note that, for most of the book, the science is merely the background for a love story; it is not the primary focus of this novella. However, without giving away the ending, Alex’s research does plays a profound part in resolving his dilemma.

Told in the first person by Alex, the reader is able to share his excitement over research advances, and clearly see his inner turmoil as he struggles with his feelings over Janine. Of course, even with sharing Alex’s thoughts, the reader will likely scream at him to ask Janine out on a date. And while the reader may be upset with Alex and the decision he eventually makes, the creative ending to the story will likely have the reader cheering.

For more information, please visit the publisher's website at: Emergentnovels.com