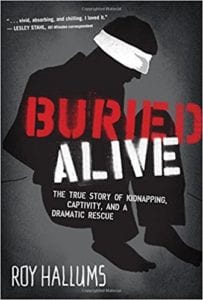 In 2004, Roy Hallums was a contract worker employed by a Saudi Arabian company. His job took him to Baghdad, Iraq, at the height of the US led invasion. Buried Alive is Hallums’ account of being kidnapped and surviving 311 harrowing days of torture, confinement, and terror.

Early one evening, while his co-workers were at a nearby dinner party, Hallums decided to go to his office to get some work finished. Unfortunately, it was at that very moment that a group of thugs raided the compound, searching for money, computers and other equipment. Hallums was not the target of a kidnapping, he simply had the misfortune of being in the wrong place at the wrong time. After a brief shoot-out, the gang made off with a stash of computers, plus Hallums and one other employee, Robert Tarongoy.

The two terrified captives were blindfolded and thrown into separate vehicles for a dangerous ride through the streets of Baghdad. Arriving at a “safe house,” Hallums and Tarongoy were bound, gagged and tossed on a cold floor, their fate unknown.

The hostages were moved frequently and the safe houses they were kept in varied greatly, from one room tool shacks to two-story houses with indoor plumbing. Subjected to repeated beatings and interrogations, the men never knew, from day to day, if they would live or die.

Eventually, Hallums’ captors moved him to a farmhouse out in the country. Hallums and Tarongoy were tossed down a concrete hole underneath the floor of one of the farm buildings. Measuring approximately nine by eleven feet, the enclosure was not tall enough to allow a man to stand. This claustrophobic prison would be where the two men would remain for the duration of their captivity.

Forced to keep their masks on, even in the total darkness, they endured heat, cold, hunger and illness. Other hostages were thrown into the underground prison, and the group developed hand and foot tapping signals to communicate with each other.

Hallums recounts his ordeal in chilling detail. He doesn’t play the hero and never looks for sympathy. Rather, he describes his daily routines, what kept him going, as well as the bizarre and sometimes bungling actions of his captors. At one safe house, while he was praying not to be beheaded, he could hear the guards playing an American video game in which American soldiers were shooting Iraqi insurgents. At another house, the guards liked to watch Tom and Jerry and America’s Funniest Home Videos.

Buried Alive starts out fast and never slows down. Within the first few pages, Hallums is kidnapped and thrown into the getaway car. After a few minutes of reading this book, I truly couldn’t put it down. In fact, I read Buried Alive in one sitting.

Quill says: Buried Alive is the enthralling story of one man’s will to survive. Don’t miss it.