Bull Canyon, A Boatbuilder, a Writer, and Other Wildlife 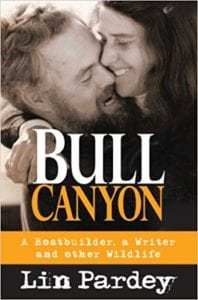 Bull Canyon, A Boatbuilder, a Writer, and Other Wildlife

Lin was a Southern Californian girl who was swept up in the dreams of the freedom she’d have when she was old enough to leave home. When she finally did leave, it was one of those ‘don’t let the door hit you on the way out’ moments, but she was determined to make her way in life on her own terms. Working as a “glorified accounting clerk” and taking on other low level jobs to maintain that hard won freedom gave her a good dose of reality. It was a busy life, but there was no dreaming to be done until a twenty-six-year old Canadian unexpectedly waltzed into her life regaling her with tales of cruising around the world on a sailboat he was making. A whirlwind courtship and the lure of the high seas was the elusive dream she had been searching for. Lin had met Larry Pardey and with the announcement to her family that “I’m going to grab hold of my own life with this Canadian yacht skipper and see the whole world full-time, not just on two-week vacations,” she was on her way.

They worked hard building the twenty-four foot “Seraffyn,” the boat that would cement their lives together. “She’ll take care of us if we build her tight,” Larry would tell Lin. Marriage vows, with the word ‘obey’ included, sent them on their way. The “Seraffyn” would prove to be their home for eleven adventurous years, years in which Lin would begin writing about their lives as they sailed the world. Toward the end of their time with the “Seraffyn,” during a gale south of the Aleutian Islands, Larry began to dream of another boat, an interlude in which the “Taleisin” would be born. Larry’s “dreaming and scheming” soon brought them to Bull Canyon where they set up shop in a little stone cottage Old Man Payonessa had built many years ago.

The cottage was not silent nor were they alone in the beginning. “I felt something race across the blankets covering my feet,” Lin would later say about their “rat-filled night.” The “Taleisin” would take shape in Bull Canyon, but there was much work to do even before the first plank could be laid. Larry’s “amazingly mechanical mind” and determination laid the groundwork for the boat while Lin would write to finance the venture. It wasn’t long before they would meet the rest of Bull Canyon, the place they would call home for a time. Sandy Shomler told Lin that she shot through the cracks in the ceiling to kill the rats. Oh, and she also mentioned that she’d met her husband, Pete, in the “Orange County Jail.” Bob Steele, a man who had a way with machines, quickly showed up to help them with the framework or the boatshed. Lin and Larry had only begun to meet the quirky inhabitants of Bull Canyon, the place where they hoped to create yet another dream.

This intriguing tale of Lin and Larry Pardey’s life in Bull Canyon will mesmerize the reader. The soft, gentle way Lin captured the goings on of the Canyon made me feel as if I too wanted to live beyond the sidewalks for a while. This time capsule of the four years they spent building the “Taleisin,” even though at one point as Lin said, “the charm began to wear off,” gives everyone a nice glimpse into their relationship and life together as they pursued yet another dream. Life in Bull Canyon didn’t always prove to be easy and they wondered about their decision … “Had we made a mistake in trading the freedom of our sailing life for the constraints that now molded our days and nights?” I enjoyed meeting their endearing, albeit somewhat whacky, neighbors who were able to make a go at life sans the benefit of telephones and electricity. This is a story of an interlude in the life of the Pardeys, a life well spent. In Larry’s words, “I’m the luckiest guy alive. I’m not spending the best part of my life working for ‘the man.’ I’ve got a grand partner to share my ideas.”

Quill says: This lilting memoir will complete those who read the Serraffyn books and send the rest of its readers to them in search of that dream and adventure!