Buddy: How a Rooster Made Me a Family Man 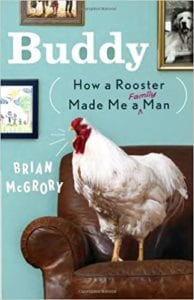 Buddy: How a Rooster Made Me a Family Man

There are a myriad of books today on dogs, and how those canines saved the author’s life, brought meaning to the author’s life, brought joy to others, and so on and so on...there are even books about cats doing the same things. But a rooster? I’m willing to bet there aren’t a lot of books on the market dealing with how a rooster changed a man’s life. Buddy, then, is one of the first such books.

Buddy is the story of Brian McGrory, who after finding himself divorced and then losing his best friend, Harry the Golden Retriever, finally came to the realization that Harry’s veterinarian, Dr. Pam Bendock, might just be his soul-mate. But dating, and later marrying Pam, will force many changes on Brain, a diehard city boy. Pam lives in the suburbs, has two young girls, a couple of dogs, rabbits, and yes, a rooster named Buddy. While the other animals easily accepted Brain, and Pam’s daughters slowly came to appreciate their step-father, Buddy insisted Brian was an intruder and the rooster needed to protect “his flock.” Protection inevitably led to Brian, at times, fearing for his life as Buddy came at him, beak outstretched. Brian had to resort to carrying a rolled up newspaper around to protect his lower legs from the onslaught.

The author, a writer and then editor for the Boston Globe, clearly excels at putting his thoughts down on paper. The book is well written, funny, and engaging. Retelling Buddy’s exploits from the meltdown he had at Brian’s Maine vacation home to the building of Buddy’s “McMansion” in the backyard will keep you turning the pages. It should be noted, however, that writing just about a rooster would make this a fairly short book so there is a fair amount of storytelling revolving around other characters such as Harry, the author’s beloved dog who introduced him to his future bride Pam. At first I was a bit disappointed that so much text was devoted to Harry, but honestly, the stories were so much fun that I soon found myself enjoying the Harry stories just as much as the Buddy adventures.

Quill says: While not entirely about a rooster named Buddy, this book will appeal to anybody who loves a good animal story.