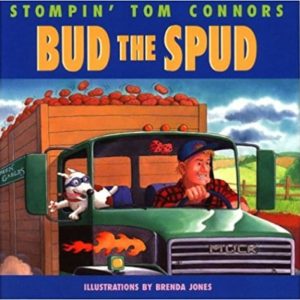 Bud was a regular kid, just like all the other kids he knew. He had friends and family who cared about him, he liked pizza and ice cream and all the other things that most kids enjoy. But Bud also liked TV. No, he didn’t like it, he LOVED it.

Soon, all Bud wanted to do was eat and watch TV. His friends and family tried to get him off the couch, to go outside, to play, to do anything but watch TV. But Bud wouldn’t move. Eventually, everybody gave up on Bud and he was left alone to eat and watch TV. And then something horrible happened…Bud turned into a couch potato, literally!

Bud was now a dusty, musty, round and splotchy coach potato! Was it too late to help Bud? Could his terrible fate be reversed?

Bud the Spud is, admittedly, a very unique book. The cover is one that most parents will wince at, but parents are not the target audience. Pre-teens, who might very well be on the same path as Bud, are the ones who need to read this book and no doubt, they (particularly boys) will love the rather grisly cover and interior drawings. The story has three possible endings: “recommended for most audiences,” “recommended for those who are squeamish,” and “recommended for those who don’t care how much psychological damage they do to their children.” There is a note from the author to kids on the front jacket flap, and one to parents on the back jacket flap noting that kids find such gruesome things “horrifically hilarious.” This is the same tactic that has made so many "gross out" books poplular with youngsters. Hopefully, those kids who read this book will come away with an understanding of the very serious message it sends – get off the couch, turn off the TV and go outside and play!

Quill says: DON’T judge this book by its cover – while a bit, er, unusual, it really does send a very important message.