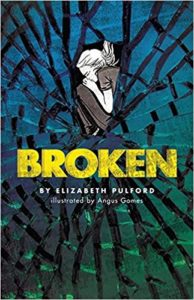 Elizabeth Pulford’s novel, Broken, begins with Zara Wilson’s thoughts as she lies motionless in a coma in the hospital after a tragic motorbike accident. Even though Zara is in a coma, she is still alive; which is better than the outcome for her brother Jem as a result of the accident.

Ms. Pulford dives right into a descriptive narrative using comatose Zara Wilson as her voice to depict what it might be like to be in a coma: “My head is full of bubbles. Strange floating words, bits of conversations, bits of people. Some I know. Some I don’t...” These are the random thoughts floating through Zara’s mind. While Pulford doesn’t specifically spell out what happened, the reader eventually pieces together a motorbike accident that occurs after Jem, Zara Wilson’s brother, caves to Zara’s relentless pleas to go for a ride along the beach—neither knowing a destiny that would change both their lives forever.

As Pulford develops her narrative, she shares deeper dynamics to Zara’s personality. The description assigned to Zara likens her to the girl next door. Conversely, her best friend Trace sounds Goth-like. No matter, she is Zara’s confidant and loyal friend who visits the hospital often. Zara is a complex child and there is no question she has an undying and unrequited hero worship toward her brother Jem. Even though family members and friends are encouraged to talk to Zara and utter words of encouragement in hopes of her awakening, Zara is deep within the bowels of her own subconscious fighting to surface. Jem had an immense affinity for comic books and was drawn to one series in particular, one with a villainous character. Zara is a gifted artist and while in her coma, as she struggles to surface, she imagines she is trapped inside the comic book series. She takes to her sketching to create and draw situations to place her one step closer to finding her brother Jem as she wanders the halls and recesses of her mind in search of him. She is convinced he has been taken by the comic book villain and only she will be able to find and rescue him. What she doesn’t realize in her search is that she seeks to find her own truth and face it—a truth of an egregious assault that happened to her many years before.

This story is complex with its added subplots working throughout. However, I give Ms. Pulford great props for knowing her characters and exercising beautiful patience as she guides the reader through the complexities. She has a carefully crafted step-by-step narrative that she spoon feeds the reader and orchestrates understandable conclusions to how all events unfold. This is a story that easily entices the reader to continue turning its pages. It was intriguing to listen to Ms. Pulford’s voice as she spelled out the wonder of what it must be like to be in a coma; yet hear life going on about you. At the same time, however, there is a frustration through the voice given to Zara because she desperately wants her visitors to know she can hear everything they are saying and doing; yet she is unable to emote this to them. Simply put, Ms. Pulford has demonstrated she was in command of her pen’s destiny from beginning to end in Broken. It was put together prolifically and I look forward to her next body of work.

Quill says: Broken is an intricate hypothesis of the inner works of the mind and what it might be like to exist in a comatose state.