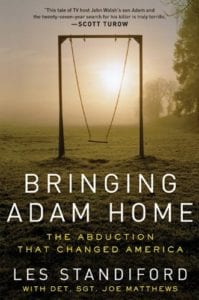 "Cooter, Cooter, where are you?" Revé began her frantic search for a child who could not hear her. She'd only left him near the video games in Sears for a very short period of time and walked a mere fifty feet away to look for a lamp on sale. John told her it would be a good idea to get one because they could save a few dollars, but neither one of them expected this shopping excursion to turn into a nightmare. When she returned, the area was eerily silent and Cooter was nowhere to be found.

In shock she began to run in search of her firstborn, the boy they'd nicknamed, "Cooter." She sought out the help of a young seventeen-year-old security guard who pored over a picture of the six-year-old child from a school photograph. No, she hadn't seen him. It was a lie she would have to live with the rest of her life because yes, indeed she had seen him. In fact, she had tossed that child and a few other boys out of the store for arguing over a video game. That unfortunate decision put young Adam Walsh into the clutches of unspeakable evil, an evil from which there would be no return.

The intercom system too talked to a boy who could not hear it. People began to search and John soon arrived on the scene to comfort the now desperate Revé. He later admitted that "For the first time in my life, I understood what real fear was." (pg. 20) The Hollywood police department quickly stepped up to the plate and began interrogating those closest to Adam. Even John underwent a seven hour polygraph test administered by Detective Sergeant Joe Matthews. Jack Hoffman, the detective in charge, and his partner, Ron Hickman, rabidly went after Jimmy Campbell, Adam's godfather. "I know I've got to calm down. I've got to calm down and convince myself not to let the barbarians get to me." (pg. 38) Matthews heard him, but Hoffman didn't care. He figured he had his man. How many other things did he figure he had right? Would he ever admit he was just plain old wrong about anything in this case?

"Our baby's dead." The search for Adam was over and those three words were something no man would ever want to tell his wife. John and Revé had done everything in their power to get word out about their missing child and now it was time to grieve, but their quest for justice would be unending. They began to advocate for other children who could not speak for themselves. The fight continued over the years, but November 14, Adam's birthday, continued to come every year without resolution to the case.

The nuts came out of the woodwork, including Ottis Ellwood Toole who kept claiming he'd done it. Yeah, right. Hoffman was not interested. Twenty-five years later one boorish question set some wheels in motion and the investigation would be reopened. Matthews would find some very interesting things, but would he be able to pinpoint who committed this heinous crime? Would he get the Hollywood PD to cooperate? Why had so much evidence been ignored? Was someone trying to hide something?

This is one of those haunting stories that people often wonder if the purpose for writing it was simply to rehash the same old story, beating a dead horse. After I finished the first two hundred pages, I had that "enough already" feeling, but later realized that the repetitive theme was indicative of what the Hollywood PD had to deal with at the time. The later part of the book was redemptive and stunning as it slammed the lid on the case.

Bringing Adam Home was emotionally evocative and I found myself running the gamut from being teary-eyed to downright angry and in one instance quite shocked. For example, before Adam was found, Detective Hickman said to John, "I know how you feel, but if you take Jesus as your savior, your son will return." (pg. 170) At moments like these I began to wonder if my motive for reading the book was voyeuristic, but quickly remembered why I selected the book. The disappearance of Adam greatly affected my life in that it influenced my own parenting style. I saw those milk cartons, I heard that story dozens of times, I remember the formation of the National Center for Missing and Exploited Children, but most of all, I remember that little gapped toothed boy with the red baseball cap. This book brought me a sense of comfort and closure when Matthews brought Cooter home ... at last.

Quill says: This stunning book about the Adam Walsh case shows that "hard work, dedication, and love can triumph, and goodness can overshadow evil."