Breath of Angel (Book One of The Angelaeon Circle) 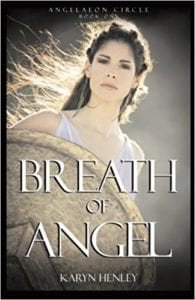 Breath of Angel (Book One of The Angelaeon Circle)

Angels have always been a mystery to us, and in this new series, angels are both the protectors and the deceivers.

Author Karyn Henley takes readers into a world full of magic and secrets by telling the tale of one girl who has to beat all odds in order to discover who she is. It all starts with Melaia, who is a chantress in the city called Navia. A chantress has the ability to help souls such as, when someone is passing away, a chantress can play their harp and perhaps save the soul by placing it back into their body, or calm the soul as they head toward the light.

Melaia witnesses a brutal murder of a young stranger by a hawk. Only later does she discover that the slayed stranger was actually an angel, and the hawk was actually a man who was involved long ago with destroying The Wisdom Tree. The Wisdom Tree is the place where angels could go back and forth between Earth and Heaven, and when the tree was destroyed, many angels were left behind - both good (Angelaeon) and bad (Malevolent).

An angel named Dreia was standing guard at the Wisdom Tree, but because of two brothers - one who was truly in love with her but had to pay a ‘debt’ to the angels - she was locked in a family battle. What the chantress doesn’t know is that she, herself, is involved with the whole legend. Life changes for Melaia as she’s sent to play her harp for the melancholy King of Redcliff. It is a beautiful harp, made of material never seen around their lands anymore. And…there are three of them. Whoever possesses these three powerful instruments can rule or ruin the land.

As Melaia journeys to Redcliff, she is guarded and escorted by the kingsman, Trevin. Feelings begin to form between the two of them, but are soon broken as she finds him betraying her. Why the betrayal? Trevin works for the hawk man who was the slayer of the angel. In time, Melaia must figure out who is good and who is bad as she tries to discover a way to recreate the Angelaeon’s pathway. Mystery twirls around the chantress as she does her best to understand truth and faith, and to discover where she came from, who she really is, and where her heart should be.

This first book in the series is an excellent piece of fantasy fiction, offering non-stop suspense and new…very illuminating characters. Every chapter seems to end with some new secret that begs the reader to continue with Melaia on her quest.

Quill Says: Bring on the angels! Readers will find this fantasy hard to put down as they experience the wonders of the angelic world.