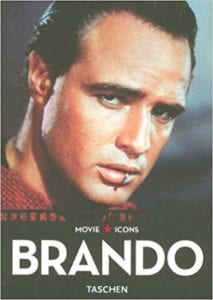 One of the greatest Hollywood influences, Dot Pennebaker, is a virtual unknown, but without her talent there undoubtedly would have been a huge gap in its classical era. She coaxed Henry Fonda into cutting his teeth on the stage and “actively promoted” her son Marlon’s career. His mother’s talent was said to be superb and she nurtured both Marlon and his sister Jocelyn’s talent in their local Nebraska theater group. One of Brando's most memorable appearances on the silver screen in A Streetcar Named Desire (1951) stunned the world with his phenomenal acting ability. Another unexpected, and certainly unwelcome, influence in his life was his father, Marlon senior. He was an abusive, alcoholic, ofttimes violent man who was not enamored by acting of any sort. He was brash, bold, and moody. Consequently his raw, heated personality “put him on a lifelong collision course with his highly emotional son, whom he verbally abused throughout his adolescence.” (pg. 12)

Brando was a method actor who had an uncanny ability to become any character he was portraying. When he was acting in the play, Truckline Café, he was so convincing that “Critic Pauline Kael mistakenly believed young Brando was having a seizure onstage, his acting was so vivid.” (pg. 25) This 1946 appearance convinced the world he definitely was a young man of genius, but after A Streetcar Named Desire he became a star. Elia Kazan claimed to have discovered him and the likes of James Dean ‘worshiped’ him. Brando detested the character of Stanley Kowalski, yet continued to embrace each role he accepted as if he were born to it. Prior to Stanley, he eagerly accepted the role of ‘Bud,’ a disabled veteran, in The Men (1950), another memorable stunning, sensitive portrayal of a man lost in his inner feelings.

Brando began to surge forward quickly, becoming known by his audiences as a “charming enigma.” Academy Award nominations came in quick succession for Viva Zapata! (1952), Julius Caesar (1953), and On the Waterfront (1954). Brando’s roles in the 1950s were varied, most likely a factor that kept him from being typecast. An amazing portrayal of the Okinawan interpreter, Sakini, in The Teahouse of the August Moon,shocked his audience. They had been complaining they hadn’t seen their star and were stunned when they were “told he had been onscreen for most of the movie.” (pg. 83) Marlon Brando, the enigma, was really becoming the characters he portrayed on screen. The 1960s brought even more diversity to the table with his portrayal of Rio in One-Eyed Jacks (1961 - cover portrait) and The Ugly American (1963). And then there was The Godfather (1972) and the erotic Last Tango in Paris...

This amazing book recounts the Brando that could only be lured in front of the camera with the promise of millions. Many may bemoan the fact that he could have created more masterpieces, but those he did create were simply incredible. This photobiography takes the reader on an incredible journey through his life on the silver screen, a journey presented with unforgettable, stunning art-photography. The short biographical sketch and individual captions are presented in English, French, and German. I’ve read several of the Taschen Movie Icons series and am mesmerized not only by the photography, but by the amount of information that can be gleaned from the captions and quotations on each page. In the back of the book is a chronology, a filmography, and a bibliography.

Quill says: This photobiography of Marlon Brando, an American film icon, will take you into those little corners of his life perhaps you never knew existed. If you want a glimpse of Brando at his best, Taschen steps up to the plate to provide a quality experience!