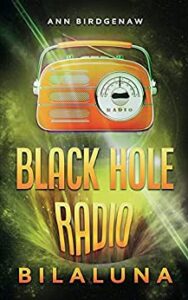 Best friends and space explorers Hawk and Matt are off on another adventure, this time with a new friend, Celeste, in the second book in the Black Hole Radio series, Black Hole Radio: Bilaluna.

As book two begins, Hawk and Matt have just returned from their amazing adventure from book one where they got sucked into a wormhole thanks to an old radio in Hawk’s garage. Was it a dream or was it real? Regardless, it’s soon time for school and the two boys once again find themselves sitting in Mrs. Bupkiss’ class. Unfortunately, she decides to call on Matt to see if he’s done his homework. Amazingly, he’s able to answer every question correctly, thanks to Hawk giving him all the answers via ESP. Apparently their last adventure wasn’t a dream.

After class, Hawk notices the new girl, Celeste, standing by herself. The teacher said Celeste has Asperger Syndrome, and while Hawk doesn’t know what that means, he tells the reader that Mrs. Bupkiss says Celeste may be shy and not like to make eye contact. Since Hawk gets picked on for being too “geeky,” he feels he can relate to Celeste. Soon they’re talking and before long, Hawk is inviting her to his house to check out their very cool science club.

Celeste is the perfect new science club member – her parents are both astronomers and she too, loves science “stuff.” But at the first meeting, Celeste hears a strange beep, beep, beep, beep, and needs to find out what’s causing the noise. Of course, Hawk and Matt know that it’s the radio. Yes...that radio - the radio that sucks people into a wormhole and sends them far, far away.

The three friends are soon transported to a bug planet, with all sorts of cool bugs. Thanks to Hawk and Matt’s ability to use ESP, they’re able to communicate with the bugs. BUG-203, a “Bipedal Unibodied Golem,” tells the travelers that they “…are on moon Bilaluna, orbiting planet Poo-ponic.” The bugs welcome Hawk, Matt, and Celeste, and give them a ride in their moon buggy, heading to the bug colony. The three earthlings, however, notice that the terrain appears dead. The few areas where they find trees, they discover that the bugs are destroying them to create power to produce nectar that the bugs need to survive. Celeste has to use her knowledge of insects, as well as environmental issues, to try and help the bugs save their moon. Will she and her new friends be able to convince the bugs to use the humans’ knowledge to save Bilaluna? And if so, will what they propose work?

Black Hole Radio: Bilaluna is the second book in the Black Hole Radio series and like the first book, this one is quite imaginative. The author has found her stride in this book, where the writing is tighter, and the story moves quicker than it did in the first book. The resolution to the bugs’ problems with their moon requires an understanding of environmental issues such as what bugs contribute to the Earth’s health, which Celeste happily shares with the bugs, and thus, the reader. Another nice touch is that while the first book was narrated by Hawk, this time Celeste takes “the reins,” and narrates most of the story. The reader gets a look at what it’s like to have Asperger Syndrome, the struggles Celeste faces, as well as all the awesome things she contributes. It’s a great way to build empathy toward those who might be different.

Quill says: Space, bugs, wormholes, and saving a moon environment all figure prominently into Black Hole Radio: Bilaluna. If you have young readers (ages 9-12) who like stories with wild and crazy adventures, check out the Black Hole Radio series.