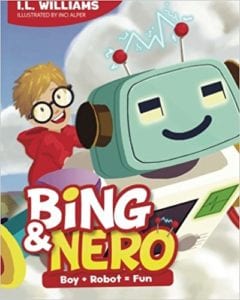 Ho, hum, it was soooo boring just looking out the window. Bing didn’t have anything to do and a cat really wasn’t any fun. No fun at all actually and “none of his friends could come and play.” Bing would never be bored if he had a dog, but his mother said he couldn’t have one. He’d even decided to name it Nero, but just maybe there was something else he could do. All of a sudden Bing had a great idea. He “would make a new friend” and that friend would be a robot. Down over the stairs he went and into the basement. There were several boxes and yes, there was that boring cat sitting on one, but Bing wouldn’t be bored for long.

Bing began to open boxes “to find all the parts he needed.” There was an old toaster, a hair dryer, a speaker, and all kinds of things he could use to make that robot. Bing worked for hours while that boring cat looked on. He decided that “it wasn’t so easy to build a robot,” but he kept on working. He put his hand to his chin and looked at his robot. Hmmmm, not everything was going right, but after a while he was all done. Bing flipped a switch and his robot’s eyes flashed and sparks began to fly. It sure looked like he’d have a friend and when the robot began to smile at him he knew he would. There was no Nero the dog, but Nero the robot. Just what kind of fun could a boy have with a robot?

This is a fun, charming tale that everyone who ever wanted a robot will love. Bing most certainly looks like a little scientist in the making and I loved to watch him as he created Nero. The artwork was bright, colorful, vibrant, and definitely added to the tale. Bing had an appealing Harry Potter-like look that many young readers will love. The imaginative tale was fun and moved right along as Bing brought his creation to life. The book is in picture book format, but young emergent readers will be able to tackle the tale with a minimum of assistance. The perfect book for any young robot lover!

Quill says: If you have a youngster who’s into anything “robot,” Bing and Nero will be a big hit with them!