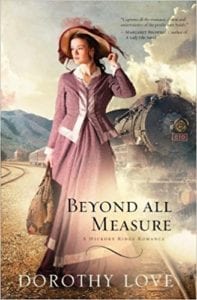 It’s not going out on a limb to say that this, and all future Hickory Ridge romances, will become very beloved books by romance readers everywhere.

We begin with Ada Wentworth. Ada finds herself completely stranded at a train station, waiting for a woman with a white parasol to show up and escort her to her new job. It is 1871 in Hickory Ridge, Tennessee, and Ada has just traveled a long way from her home in Boston. Back East, Ada lived a bit like a Queen for a time. She was certainly a part of the “well-to-do” families that held their fortunes and their connections very dear. So, why move South? Because Ada Wentworth has recently lost everything - her family, her wealth, her fiancé - she has absolutely nothing but a few dollars and an old trunk filled with everything she owns.

She saw an advertisement in the Boston newspaper for a lady’s companion that was needed for a woman living in Hickory Ridge, and jumped at the chance to move far away from the sinister luck that she’d been having. But the heat is horrific, and sitting at the train station all alone is NOT something that Ada was prepared for. Soon, a man arrives by the name of Wyatt Caldwell to retrieve Ada and bring her back to his Aunt Lillian’s home.

Aunt Lillian is the woman that Ada will be working for, and her nickname is actually “Starch & Vinegar.” When Ada inquires as to what happened to the woman who was supposed to come pick her up, she is told that she had escaped in the middle of the night. Not only that, but she wasn’t the first “worker” for old “Starch & Vinegar” who quit at a moment’s notice and rushed to freedom, so Ada is more than a bit worried about what she’s gotten herself into.

Wyatt Caldwell is a true businessman. He owns his own lumber company and has built himself a beautiful home in Hickory Ridge, but his heart remains in Texas. In fact, what he wants for his future is a Texas ranch life, but he can’t yet leave Aunt Lillian all by her lonesome without someone to look after her. Ada, like Wyatt, has plans of her own. She only wants work for Aunt Lillian for a brief time in order to save funds so that she can someday open her own millinery shop.

But, as fate would have it, Ada is about to embark on an adventure. “Starch & Vinegar” is a grande Southern dame who is truly hysterical and who Ada has to come to terms with. Being a Northerner in Southern territory after the war has just come to an end makes this no easy task. Add in a growing passion for the Texas gentleman, and Ada finds herself falling for the dreamy cowboy, and wondering who, exactly, she should trust.

The characters are filled with charm and elegance; the “man of the hour” is so breathtakingly sweet and ruggedly handsome he will make any heart swoon; and the historical locations and “sights” are extremely interesting.

Quill Says: A romance with real emotion, and wonderful characters who should be seen again in the many Hickory Ridge novels to come!