Between Eden and the Open Road 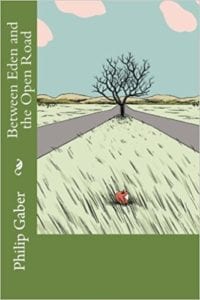 Between Eden and the Open Road

Philip Gaber delivers a compilation of often dark and sometimes, borderline disturbing poetry in Between Eden and the Open Road.

With over 60 compilations of accounts ranging from failed relationships to broken and troubled beings struggling with drug or alcohol addiction (or both), emotions spiral downward and sheer hopelessness is thematic throughout this book. Mr. Gaber uses his poetry vehicle to detail insights of what it all means for his subjects to arrive at rock bottom in their respective lives. In his poem "the bright coming morn," it appears as though Mr. Gaber has encountered a homeless person; what his “mammy” would refer to as: “…He was what my mammy called "booze-sodden." They engage in conversation and the bum shares his "hard times" story. Eventually they part ways, but not before the bum achieves victory and receives a few coins for his next bottle of liquid magic. Given the exchange in this particular poem, the title was somewhat contradictory for me to glean a "bright coming morn."

Later in the book, "she likes music in the key of g-minor," a troubled woman is introduced. She is in a therapy session. The meeting between counselor and patient is one-sided at best as the only reason the nameless patient is sitting in the therapist’s office is because: "...My family thought I should come. They felt my behavior was in noncompliance..." Again, I found this poem (and many for that matter) to perhaps be snapshots of the writer himself. Throughout the entire collection of poems, there is a common and sublime theme: "I have fallen on troubled times many times and want to share the experiences with you."

It would be completely unfair of me to write a review of how poor the writing is; because such is not the case. In my opinion, the inherent goal most writers endeavor to achieve is that of tapping into the heart-felt emotions of his or her reader. Mr. Gaber tapped into my emotions on many occasions and therefore accomplished (his) writing goal ten-fold in Between Eden and the Open Road. The book's dedication alone grasped my attention before I even read the first poem: "This book is for those to whom it speaks." It's one of the most beautifully stated challenges I have ever read. Bravo Mr. Gaber. I finished Between Eden and the Open Road in a few day's time and wonder how much of Mr. Gaber's compilation was intended to be a series of fictional situations and how much was a personal journal of experiences encountered in his own life. Perhaps we will never know the exact answer.

Quill says: Between Eden and the Open Road delivers a lofty serving of food for thought and certainly is for "...those to whom it speaks."

For more information on Between Eden and the Open Road, please visit the author's website at: wix.com/philip-gaber