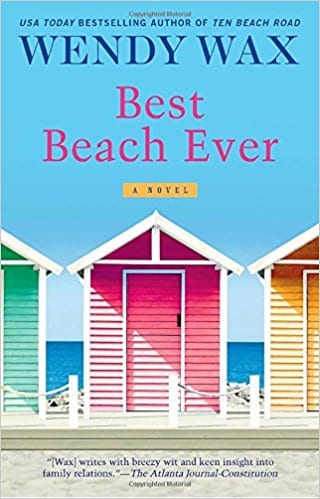 Wendy Wax checks in with the ladies of Ten Beach Road in her latest novel: Best Beach Ever.

Maddie, Nikki, Avery, Kyra, and Bitsy are still licking their wounds and trying to recover from the aftermath of the implosion of their renovation-turned-reality-TV show Do Over. To compound the disaster of the show, the ladies are forced to move into the cottages at the Sunshine Hotel after Kyra’s plunder of leveraging Bella Flora.

Maddie has done her job. Her children are grown. Her ex is back on his feet and she can honestly admit she doesn’t loathe him anymore. Sparks have grown into a decent and long-burning fire between her and revived Rock Star Will Hightower. Yep, she has the world on her platter and can’t figure out why she’s so apprehensive to dive into the deep end and savor every moment.

Nikki finally said yes (even if the babies came first) and FBI hotty Joe is more than her dream come true. Granted, she had no idea becoming a mother would be such a monumental task. Take that role and multiply it by two bundles of joy and the recipe is one for overwhelm overload most days. Once again, Joe to the rescue. With the reality of him having to travel more, he decides it’s time Nikki accepts some helping hands. Nikki has other designs on just how much help she will accept from the new nanny and it isn’t necessary to bother Joe with all the details of her decisions on this front.

Avery and Chase are on again. This is to say, at least all cylinders are firing in the bedroom. It was a tough call for Avery to make after virtually being kicked out of Chase’s life thanks to the shenanigans of his son. No matter, the sex was great, and it wasn’t like she was ever going to marry him, but did Chase feel the same way?

Having nearly lost Bella Flora, Kyra had no choice but to rent her beloved property to the mysterious (and obviously wealthy) tenant. Besides, she and Dustin would soon be on set near Disney World which meant she wouldn’t have to face the errors of her ways living in the same town as the stranger who occupied Bella Flora. She hated the idea of exposing four-year-old Dustin to the uncertain and harsh elements of Hollywood glam. She didn’t have much of a choice. How is it that every time Baby Daddy (and hunky movie star) Daniel Deranian beckoned, Kyra forgot how to say the word ‘no.’

…and last, but certainly not least, is Bitsy. The former Palm Beach maven was more of a seashell washed up on a deserted seashore to all those former ‘Worth Avenue Friends’ of hers. It’s been nearly a year since Bertie absconded to parts unknown with his eye-candy pole dancer and every penny of Bitsy’s wealth. It was high time Bitsy pick herself up out of her pity party for one and get some good old-fashioned justice. She may rise to the occasion but will have to be careful what she wishes for. Sometimes justice comes with a higher price tag.

Wendy Wax has delivered a fantastic continuation of the ongoing saga of the women of Ten Beach Road. Having read a few of the books in this series, it’s a fact that Ms. Wax has done this series justice once again. The divine characters she’s developed in Maddie, Avery, Kyra, Nikki and Bitsy are superb and she has maintained their unique and diverse personas. Ms. Wax is the master mixer of blending two parts big happy family with (sometimes) one-part dysfunction and the outcome is a masterpiece of exceptionally unique and strong women. She has built a solid foundation with her ‘beach’ family and setting and with each tower she adds to this magnificent collection of beach castle novels, she manages over the top enjoyment and anticipation for the next from her audience. I was already a fan and simply ask: may I have another, please? Well done Wendy Wax!

Quill says: Best Beach Ever arrives just in time for kick off to summer. This is a must have for your summer beach reads this year.