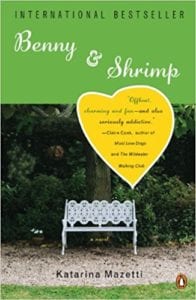 Benny is a lonely farmer, living alone in his parents’ house, with a small herd of cows, some sheep, and a fridge with moldy containers that have been languishing since before his mother’s death. Desiree, a.k.a. Shrimp, is a widower, living in town, working as a librarian. Both are approaching middle age with a sense that they might never find another love.

These two lonesome people meet in the unlikeliest of places – in a cemetery. Shrimp visits her husband’s grave several times a week, sitting on a worn green bench. Frequently, she must share that bench with a man she calls ‘Forest Owner’ (so named because of a logo on his cap), a man she doesn’t like. The feeling is shared as ‘Forest Owner,’ a.k.a. Benny, notes, “Damn and blast! I can’t stand her, just can’t stand the sight of her!” Who would expect that these two would soon fall in love?

Benny and Shrimp are soon passionate lovers, trying to come to grips with very different lifestyles. Shrimp lives in an extremely tidy apartment, close to work while Benny lives far removed from the bustle of town, on a smelly farm, in an unkempt house. Will their love be able to survive their differences?

Benny & Shrimp, originally published in Sweden, follows the love affair of the above-mentioned couple, from their first meeting, through early courtship, into the ups and downs of relationships. It is written in the first person, but what makes this novel unique is that that voice switches between Shrimp and Benny. Each short chapter is given to only one person’s telling, recounting their various dates, sexual encounters, reactions to the others’ friends, and disagreements. Many of the chapters tell of the same event, first from Shrimp’s eyes, then Benny’s. It is interesting to read how the same incident can be interpreted two different ways. For instance, Benny fixes up one of the rooms in his house, hoping to impress Shrimp (she hates his messy home). He notes:

‘…I took her up to the bedroom, flung open the door, and tried to sound like a trumpet fanfare.

I just stood there, crestfallen.’

In the next chapter, we read of the room cleaning from Shrimp’s eyes:

‘I had to fight back a violent urge to giggle when I first saw the curtains…I had absolutely no intention of expressing any opinion on his decorating tastes.’

There are similar recollections throughout the book, from the pair’s first meeting to their first fight. It’s certainly fun to see how differently they sometimes interpret the same event.

Plenty of sweet and funny episodes fill the pages of this book, such as when Benny first visits the library. “I suddenly caught sight of my boots on their way through the glass doors of the library, with me in them!”

Benny & Shrimp starts out a bit clumsy, perhaps because the text was translated from the original Swedish. Sentences such as, “I sit here on my lunch break several times a week, and always at least once at weekends,” makes the reading a bit difficult. The translation problems, fortunately, disappear fairly quickly. It also takes a while for the author to get into the meat of the story, with a plethora of chapters devoted to Shrimp’s previous life with her husband as well as Benny’s life prior to his parents deaths. True, it helps to understand the characters to know where they are coming from, but the author dwells on earlier events a bit too much. Fortunately, once the love affair gets hot and heavy, the book too gets steamy and fun. In the end, Benny & Shrimp is a touching story about two lost souls who find love.

Quill says: Keep reading beyond the slow beginning and you’ll be rewarded by an unconventional love story.