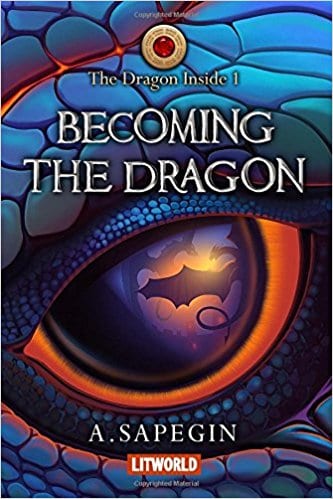 Becoming the Dragon (The Dragon Inside, Book 1)

There were not too many things Andy thought made his life extraordinary, for he was just a normal teenager, with a loving family and a few good friends. However, when he was younger, Andy did get struck by lightning while on a school field trip, but luckily, other than receiving a scar on the back of his neck, he was fine. In addition, he could no longer go near any computers, as his presence would cause them to stop working.  Without access to computers, Andy found a new appreciation for the outdoors and was constantly going hiking, biking, building things, and he even found someone who taught him to use a bow and arrow.

So, it was nothing new when his mother called him to take something over to his father at the research lab he worked at, even though it took two buses and a good amount of walking to get there. However, as Andy was walking toward the lab he suddenly fell through a portal and found himself in a whole other world, with creatures he only imagined in his dreams. For several days it was all Andy could do to stay alive, as there were creatures at every turn looking for a chance to eat him. Unfortunately, Andy’s situation gets even worse when he is picked up by a caravan of people who lock him up, and sell him as a slave in the next village. Also, it is not just humans that are being sold but also animals from the jungle, and Andy has to look twice when a dragon is brought into the village, and chained up next to him.

Amazingly, Andy and this dragon find a way of communicating and agree they will try to help each other escape. This escape, however, will be just the beginning of their relationship and Andy has no idea that he will be thrown into the middle of a huge war that will decide the fate of not only this strange planet, but the planet and family he left behind. It will take more strength than he ever thought he could possess to survive; the strength of a dragon.

When I saw this was a book by an author from Russia, I was quite interested to read it just to see how different the writing would be. In fact, I found that only a few phrases or sayings were different, for example one of the friends at the beginning of the novel is nicknamed “Troll,” which is something you would not hear often in the United States. However, other than those few different phrases or names, I found this book to be quite fascinating and found it so enjoyable to learn that the fantasy stories we enjoy here are so similar to those that people enjoy all around the world, and I loved that. Also, even though this was a shorter book ideal for middle school age readers, I think any adult who loves fantasy will enjoy this boo.

Quill Says: A wonderful fantasy adventure for readers of all ages!