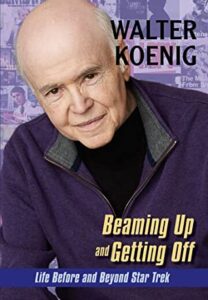 Actor, author, producer, and teacher Walter Koenig is well-known to fans of science-fiction thanks to his roles on Star Trek and Babylon 5. In 1998 he penned his memoir, Warped Factors, which no doubt delighted his fans. Now he offers an updated edition to that book, Beaming Up and Getting Off.

Koenig starts his memoir where all good memoirs start - with his family history. After we meet his immediate family and learn a little about the family's background, the author starts to explore his early years and events that impacted him in both positive, and negative, ways. Early classrooms, and teachers (one he contends must have truly been a manic-depressive with strong paranoiac influences), his first crush, and his first play are all found within the early chapters of the book.

Undoubtedly, many fans of Walter Koenig will want to dive into the "good stuff" dealing with Star Trek and Babylon 5 but there's a lot that happens before fame starts to knock at the actor's door. College, plays, and more plays, and even a visit from the FBI investigating a prostitution ring that they believed was run by Koenig. The author's time at the Neighborhood Playhouse saw him performing along with other future stars - including James Caan, Dabney Coleman and Elizabeth Ashley. We get a peek at these actors and what they were like in those early years.

There's a hefty section of the book devoted to Star Trek, from Koenig's audition, through the series, cancellation, and rebirth through the movies. He shares many behind-the-scenes events, his relationships with the other actors, as well as which episodes were his favorites and why (as well as which one he felt was the most lacking - hint: a famous lawyer appeared in the episode). There's also the Babylon 5 anecdotes as well as the author's comparison of the very different characters he played in both - Chekov and Bester.

As a long time Trekkie from way back in the 70s, I was excited to read Beaming Up and Getting Off. Because I never read the original memoir, I can't compare and say how different this new and expanded edition is. But I can say that it's a good read with lots of interesting tidbits. Koenig opens up about a lot of things, and is brutally honest, far more so than many actors in their personal stories. The memoir does get off to a slow start as there's a bit too much background from his early years, but once his career starts to get going, so too, does the story.

Quill says: Beaming Up and Getting Off is a satisfying read for both Star Trek and Babylon 5 fans, as well as those curious about the life and struggles of an actor.