Bad Girls: Why Men Love Them & How Good Girls Can Learn Their Secrets 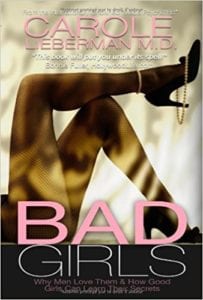 Bad Girls: Why Men Love Them & How Good Girls Can Learn Their Secrets

Carole Lieberman is internationally known as the "Media Psychiatrist." She not only appears as a psychiatric expert on shows like Oprah and Larry King Live, but her articles have appeared in many major newspapers and magazines across the globe. With this book, Ms. Lieberman offers a study of "Bad Girls." Whether famous, infamous, or simply characters from an author's mind (think Scarlett O'Hara) this expert delves into the reasons why good, solid men change their entire lives sometimes in order to "land" a bad girl.

In over one hundred interviews, the point of bad girls and how they were created are covered. They were once, in essence, good girls who wore their hearts on their sleeves and were destroyed in some way by a man - whether boyfriend, father, or husband. Because of pain or heartbreak of some sort, they locked away their hearts and souls in order to treat men as "prey." A bad girl has been hardened by her past and no longer expects to be loved in any way, shape, or form. She also, at times, believes that she deserves better. She deserves the Happily Ever After that, of course, won't happen now that she's been demolished by a male - so she strives for one that will at least involve wealth and getting everything she is completely owed and entitled to.

Good men seem to fall for these women. Whether it be because of looks, sex, or simply the urge to protect the damsel in distress, the reasons vary depending on the woman. What the knights in shining armor forget, however, is the fact that the damsel can trample them into oblivion and steal their self-respect, savings, and sanity.

Twelve categories of women are covered in this book from gold-diggers to the Addict, and each and every category offers background information on what this "type" of woman wants and what she will do to get it. Example being the Gold-Digger. This is a female who is angry and believes she's entitled to the things she never received from her father. This is the Cinderella syndrome that completely attracts the type of man who is desperate to feel power and control as they spread their wealth, buy this woman as much as possible, and know that they have her for life - or for as long as their wallets hold out. At the end of each chapter, there is a list of people (real and imaginary) who are put into these categories (i.e., Anna Nicole Smith is placed in the Gold-Digger's).

In addition, there is a Bad Girl test that will allow all women to see whether or not they have it in them to become (or already are) a listing in the various categories. The men who peruse this information can also take a test letting them know whether or not they're sitting ducks.

Although the writing is fine, the subject matter certainly isn't a new, breakthrough idea. In fact, I still come across a slight problem when people speak of the bad girls like the husband stealers. Meg Ryan is placed in one of these categories because she went after a single man and dumped her husband of ten years. However, Angelina Jolie is "marked" because she trapped a married man, but the reality of it is a double-standard. Mr. Pitt was the married one and should've followed the rules, yet history will tag Jolie as the bad and disrespectful one in that situation. Sorry...the married one should always be to blame. We are who we are and are attracted to the people we're attracted to - categories really don't matter.

Quill says: The "real" stories from men who've come up against these Bad Girls are somewhat interesting, but frankly going for someone like Angelina Jolie isn't exactly a leap, guys. In the end? Bad or good...be yourself.