FQ: Thank you for such a fun read. I'm going to jump right in and ask how difficult was it to keep track of antics (and personalities) between sisters, Eppie and Popo?

LeROY: I am the one who should thank you, Ms. Lunsford, for your time spent with my tale. In answer to your question, I recall being told in a school English Lit class that character determines behavior. I didn't understand at the time, but after getting a sense of who and what Eppie and Popo each were, they just did what came naturally.

FQ: In line with my previous question, the names you assigned to each character are priceless! Where on earth did you come up with them?

LeROY: I had in mind rival sisters; stumbled upon the ladies known to the public as Ann Landers and Abby Van Buren, and to friends and family as 'Popo' and 'Eppie.' In terms of your question, somewhat oddly the character most commented on by readers is the tale's nameless 'kid.'

FQ: Without going down a political rabbit hole, I was fascinated toward Eppie's conviction to 'editing' classics to assign her point of view. What is your take on how more and more platforms are developing a 'correctness' on how one should describe something and the proper word for doing so?

LeROY: Eppie is an exaggerated throwback who has a problem with "dirty words," specifically including George Carlin's seven words that once upon a time could not be spoken on TV. Because they were taboo, there was a counter-reaction and now those words are if anything overused and mindlessly trite, in my opinion. I suspect the day will soon come when the same "forbidden fruit" phenomenon -- such as Popo's affected use of unfiltered Camel cigarettes as props -- will will make usage of currently politically incorrect terms downright hip.

FQ: In line with my previous question, have there been times when you have had to pause and think about what you will write next? Do you find yourself doing a self-edit more given today's climate than perhaps in years prior?

LeROY: Yes. But in line with my previous answer, I expect climate to change.

FQ: I enjoyed the homage you paid to the days of 'gumshoe' detective work. Who is your all-time favorite of the era of 'Private Dicks'? Why?

LeROY: My favorite was Brad Runyon a/k/a The Fat Man, a character on oldtime radio seemingly devoid of self awareness of what a ridiculous figure he was. Somewhat in the same vein, if he were a Private Dick instead of a Deputy Sheriff, my favorite would be Barney Fife.

FQ: When that first spark is lit that triggers: "I do believe I have a story brewing," how do you begin your process? Do you sketch an outline? Are your fingers burning to get right to it and you simply sit and begin to write?

LeROY: My fingers usually burn through a first chapter, then cool down. But I am a dogged sitter. The typical story doesn't begin to really brew until about halfway through a given book, which usually startles me.

FQ: What is the most memorable of character you have developed and why him or her (and what resonated to develop the character in that way)?

LeROY: Hmmm. Wish I could remember one who is memorable to me. They tend to wander off; never call, never send cards or letters.

FQ: In line with my previous question, I absolutely adored the opposite ends of the spectrum between sisters Popo and Eppie. Which of the two characters do you identify with more and why?

LeROY: If I identified with either, I think I might kill myself. Popo's pretentious intellectualism is particularly both annoying and amusing to me.

FQ: One of my standard questions to fellow authors is: when your pen begins to drag, what do you do to ignite the writing fire again?

LeROY: Nothing in particular. Just try to stay calm and carry on until the Muse yells "Fire!"

FQ: Thank you for your time today. It was a delight to read Case of a Puzzling Book. I have to say, the multiple layers and descriptive elements had me envisioning myself in the moment given the depth of your characters This is such an art and I hope you are working on your next title. If so, are you able to share a taste?

LeROY: Well, in the mode of Noah Webster -- rightly acclaimed for putting down in words what he knew and coming up with an all-time bestseller -- I might pen something about a big pigeon race that recently generated quite a local stir. And of course there is the Queen's Platinum Jubilee to get excited about. I suppose something will come up for me to put down in a book. 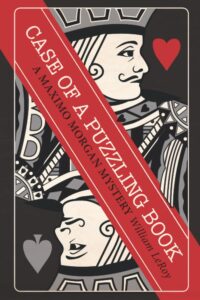