FQ: What influenced your decision in setting To Never Know during the aftermath of 9/11?

DUFFY: Having lived through the tragedy of the 9/11 aftermath, I felt I wanted to share the state of chaos the city was in. I returned to NYC from Florida a month after it happened, and the city was changed forever. The support group scene in the novel is just the beginning. People were affected in devastating ways and to see people from airlines who lost jobs and people who lost loved ones in the tragedy just made me want to tell a story of a similar type of loss. I've met people through the Knights of Columbus who also lived through 9/11 and were there in lower Manhattan when it happened. Their experiences also helped shape details in the book.

FQ:  To Never Know is an exploration of grief and healing after tragedy. Were there any parts of the novel that you found difficult to write?

DUFFY: The scene where Emily is rocking back and forth over the loss of her daughter was something that I found hard to write. I had to show how the 9/11 tragedy impacted this woman and how Steven was left to figure out how to help her. Initially, he was looking for her daughter but this scene makes him realize he has to, without a doubt, help her mother. Her mother needed someone and he had to be that person she needed for his own peace of mind.

FQ:  Steven Lewis is a complicated, and sometimes unlikable character. He demonstrates the emotional strain financial hardships can have on a person in addition to losing a loved one. What kind of message do you hope readers will take from his journey?

DUFFY: I wanted readers to cherish the now and to keep believing in life's greater purpose. There's a reason we are all here in my opinion. That reason is to help each other. Reach out to those in need and the rewards will be substantial. Steven learns this fact in the novel and becomes a better person as a result.

FQ:  In the beginning of the novel, Steven begrudgingly says, “My education teaches me that I need to earn more money to be happy and do something productive.” (Duffy 33) In the final chapters he decides to apply to graduate school and become a teacher. What changed his stance on education?

DUFFY: He has seen that money, while important, isn't everything. Happiness comes from helping others. That's why he wants to be a teacher--to give back something to others based on what he had experienced.

FQ: How did you come up with the initial idea for To Never Know?

DUFFY: When 9/11 happened, Facebook wasn't around yet. We couldn't see who was affected so easily. In 2001, it was harder to connect with people from our past. So taking this as a starting point, I completed the novel accordingly.

FQ: Do you think that high school and college graduates today face similar challenges to those that Steven faced in the early 2000’s? What’s changed since then?

DUFFY: Technology is better and helps us be more accessible to available jobs but the challenge is just as tough now as it was then. There is more competition since job applications are more easily accessible online. I wish all the best to those struggling and I wish to offer the advice to never give up and keep pursuing those ambitions in life.

FQ: In addition to writing fiction, you’re also interested in film criticism. Would you say that one style of writing influences the topics you pursue in the other? Why or why not?

DUFFY: Not really. My film criticism experience indirectly made me summarize more than analyze in my fiction writing with my first novel, Stockboy. When I picked up the pieces with my third book, One Love, I separated the two styles. However, I still put film references in my work. Notice the Good Will Hunting reference in To Never Know?  I reviewed Good Will Hunting in college shortly after interviewing Minnie Driver for Grosse Pointe Blank.  All my books except maybe The Separation have film references.

FQ: To Never Know is your fifth book. Do you find that anything about writing has gotten easier over time? What are some things you’ve struggled with as an author?

DUFFY: It's easier. I love doing it. I've struggled with sales. People bought my first book but I think they were disappointed and never trusted me again to buy another book. LOL. Look at David Fincher the film director. He started with Alien 3 which was awful. If I stayed away from all his other films because of that, I would have missed Gone Girl and Fight Club, two books based movies I loved.

FQ: Is there a specific writing process you stick to, or does it change with every book? What did the process for To Never Know look like?

DUFFY: It changes with every book. To Never Know was rushed to be released in time for September 11, 2016 but I am very happy with it. Releasing the book at the time didn't help sales. But, maybe you guys will help me move a few copies of this great book. 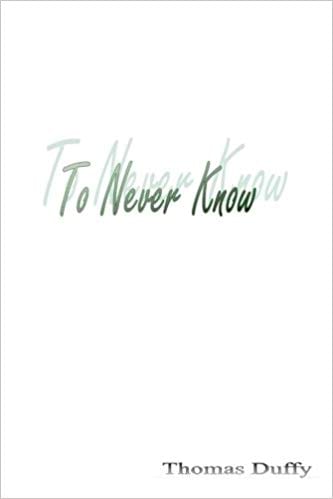