Today, Feathered Quill reviewer Holly Connors is talking with Stuart Samuel, author of The  Adventure of Thomas the Turtle.

FQ: How does The Adventure of Thomas the Turtle differ from your first children's book?

SAMUEL: My first children's book One, Two, Three, This Book 's for Mewas written for my son when he was just turning four years old. I was looking for a book with certain features (all capital letters, rhyming and rhythm, pictures beneath words to aid in the reading, etc.) that would maximally assist him to read and count. However, I could not find anything available in bookstores or online. So I generated the content myself and later turned it into a published book. Hence, this first book was non-fiction and highly educational and even lead to the publication How I Taught My Four-Year-Old Son to Read. Secondly, One, Two, Three, This Book 's for Mewas written from a young child's viewpoint. Indeed, the reaction of preschool children to it was phenomenal; they become so excited to discover how easy it was to read. However, despite this and the fact that the book won a prize (Best of 2002 by January Magazine), sales were mediocre. What I discovered was that the book did not appeal that much to parents, and parents, of course, are the ones who buy the books. So when I decided to write a book for my daughter, I deliberately wrote it from an adult point of view.  The Adventure of Thomas the Turtleis in some sense adult literature in which the parent is to read and to explain it to a child. So compared to my first book, The Adventure of Thomas the Turtleis narrative fiction aimed to be enjoyable to a slightly older child (ages 5 to 9). It is a sophisticated book in its language, with deep meanings and multiple themes. Indeed, a few reviewers have criticized the language of the book and I accept this. Authors are not usually supposed to reveal their books' ideas but many of the reviewers at Netgalley.com and Goodreads.com have discussed them for The Adventure of Thomas the Turtle. Foremost is the idea of obeying one's parents. Thomas's mother told him not to go to the forbidden regionand although he did not outright disobey her, he – out of curiosity – did venture too close. The consequences of his actions taught him a lesson that will help convince young readers that they should listen to their parents. Another theme involves family unity: Thomas sets out on a heroic endeavor to be re-joined with his family. And this brings in the character themes of courage and determination. In this regard, Thomas often prays for help. To paraphrase one reviewer, “praying in times of trouble provides hope and support to never give up.” When Thomas is separated from his mother by falling over a waterfall, he struggles battling the forces of nature to survive. This is a direct physical experience. But there are perceived supernatural elements in The Adventure of Thomas the Turtle: the forbidden region and the evil force. When a brother and sister rescue Thomas from being stuck in a thicket, it is from the Thomas' point of view as if some mysterious external intervention has answered his prayers. And this brings us to another theme, the one for which Feather Quill Reviews has selected The Adventure of Thomas the Turtlefor the “Be Kind to Animals Award”: The brother suggests taking the turtle home as a pet. However, his sister believes that Thomas is (in her words) “a natural creature and should be left as such.” So the children end up helping Thomas return to his natural habitat rather than taking him home. I have discussed quite a few themes here; however, I believe that a deeply thinking reader will find several others.

FQ: What made you want to write a children's book about turtles?

SAMUEL: The best way to answer this is that the story selected the animal. I needed a separation event: I realized that a waterfall would be perfect given how traumatic it would be to be toss over it. This and being sweep over rapids would provide a battle with the forces of nature. If you think about the rest of the story, a turtle is really the only option. I also like turtles very much.

FQ: So are you hopeful that young readers will realize that should they find a turtle in distress, they should help it return to a safe place?

SAMUEL: Definitely. As I  explained above, this is one of the themes of The Adventure of Thomas the Turtle.

FQ: The illustrations forThe Adventure of Thomas the Turtle are quite lovely. Were you and the illustrator, Nathaniel Dailey, acquainted before starting this project and how hard was it to work together?

SAMUEL: Actually, I have never met nor had any contact with Nathaniel Dailey. An editor at Jupiter Scientific (the publisher) handled everything. I agree that the illustrations are beautiful and that Dailey did a wonderful job of using them to render the story vivid.

FQ: Are you currently working on your next book? If so, will it be another animal story?

SAMUEL: If The Adventure of Thomas the Turtlesells well then there is a natural sequel.

I would like to say one last thing: Frequently authors become bored with their books having written, rewritten, read and reread them so often. However, with the passing of time, I have actually become quite fond of this brave, little turtle named Thomas.

To learn more about The Adventure of Thomas the Turtle please read the review. 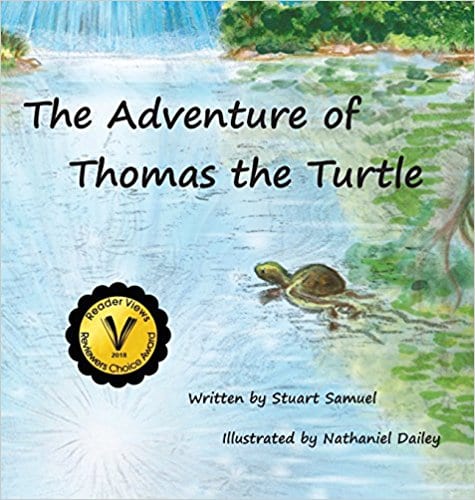